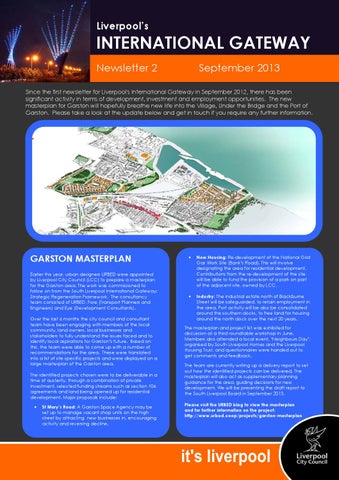 Since the first newsletter for Liverpool&#39;s International Gateway in September 2012, there has been significant activity in terms of development, investment and employment opportunities. The new masterplan for Garston will hopefully breathe new life into the Village, Under the Bridge and the Port of Garston. Please take a look at the update below and get in touch if you require any further information.

GARSTON MASTERPLAN Earlier this year, urban designers URBED were appointed by Liverpool City Council (LCC) to prepare a masterplan for the Garston area. The work was commissioned to follow on from the South Liverpool International Gateway: Strategic Regeneration Framework. The consultancy team consisted of URBED, Fore (Transport Planners and Engineers) and Eye (Development Consultants). Over the last 6 months the city council and consultant team have been engaging with members of the local community, land owners, local businesses and stakeholders to fully understand the issues faced and to identify local aspirations for Garston’s future. Based on this, the team were able to come up with a number of recommendations for the area. These were translated into a list of site specific projects and were displayed on a large masterplan of the Garston area. The identified projects chosen were to be deliverable in a time of austerity, through a combination of private investment, selected funding streams such as section 106 agreements and land being opened up for residential development. Major proposals include: 

St Mary’s Road: A Garston Space Agency may be set up to manage vacant shop units on the high street by attracting new businesses in, encouraging activity and reversing decline.

New Housing: Re-development of the National Grid Gas Work Site (Bank’s Road). This will involve designating the area for residential development. Contributions from the re-development of the site will be able to fund the provision of a park on part of the adjacent site, owned by LCC.

Industry: The industrial estate north of Blackburne Street will be safeguarded, to retain employment in the area. Port activity will be also be consolidated around the southern docks, to free land for housing around the north dock over the next 20 years.

The masterplan and project list was exhibited for discussion at a third roundtable workshop in June. Members also attended a local event, ‘Neighbours Day’, organised by South Liverpool Homes and the Liverpool Housing Trust, and questionnaires were handed out to get comments and feedback. The team are currently writing up a delivery report to set out how the identified projects can be delivered. The masterplan will also act as supplementary planning guidance for the area, guiding decisions for new development. We will be presenting the draft report to the South Liverpool Board in September 2013. Please visit the URBED blog to view the masterplan and for further information on the project: http://www.urbed.coop/projects/garston-masterplan

The story so far in South Liverpool…… 

More than 500 new homes under construction across seven sites;

£40 million of new industrial/warehousing schemes commenced since March 2013; these will create over 780,000 sq ft of space and provide 460 new jobs.

THE PLACE TO WORK New employment opportunities are springing up across the Speke &amp; Garston area. Jaguar Land Rover (JLR) have taken on 1,000 new employees as the worldwide demand for the fabulous Evoque continues. Marshalls have started on a new unit on LIBP for Johnson Controls, suppliers to JLR who are relocating from Boulevard Industry Park and will expand to 150,000 sq ft and create a further 50 new jobs. Further work will shortly begin on the new leisure strip following on from the opening of the Toby Carvery on Speke Boulevard. Two new units will be constructed to include Burger King and Starbucks.

Spurred on by the success of their new storage and distribution facility at the former &#39;Vault&#39; on Liverpool International Business Park (LIBP), B&amp;M Bargains have started on site with a further 500,000 square feet £20 million unit, which is expected to generate 294 new jobs. At the same time, Speke Business Park Ltd is investing £5 million in seven new light industrial/warehouse units at Goodlass Road. The 50,000 square feet of space will support 100 new jobs once let. Also, in a major coup for Liverpool, the recently coveted BBC Top Gear’s Car of the Year, the “BAC Mono” – the world’s first road legal single seater supercar – will be manufactured in South Liverpool from October.

THE PLACE TO LIVE South Liverpool Homes has started work on a number of housing sites across Speke and Garston. The first phase will see four sites developed with 34 homes. The second phase starting in September involves 3 further sites providing 40 new homes. Barratts have nearly completed the first phase of their development at Imagine Park, just off Speke Hall Avenue with many homes already sold. Lovells are continuing to build at their Church Fields development Under the Bridge. A mix of mews, semi and detached houses have been developed and are selling well, along with affordable rented homes predominantly built for South Liverpool Homes. The full scheme of 310 homes will be complete by October 2014. This development supported by Liverpool City Council, South Liverpool Homes and LHT has resulted in a significant change to the housing offer in the area, helping Garston in its regeneration aims and bringing new character to the area.

ST MARY’S ROAD DEMOLITION LCC is tendering for a contractor to demolish these properties which have been an eyesore within Garston Village for a number of years. Work is expected to start next month and be completed by December. The site will be grassed and railed to prevent access in the short-term however, in the longer term, it is envisaged that the site will be redeveloped. The Garston Masterplan has suggested options for the interim use of this site which are currently under consideration.

Standing in the heart of south Liverpool is the incredible Enterprise South Liverpool Academy (ESLA), a £23 million “Learning Park”. ESLA is a welcoming, calm and purposeful new school facility where everyone feels valued, supported and challenged. It is a place where students&#39; desire for learning and achievement is met by the passionate commitment of all the staff. Students grow in self-esteem whilst learning to become articulate, mature and independent learners who appreciate the needs of others and understand the value of teamwork and partnership. Visitors are struck by all that the school has to offer, including science laboratories of the same standard found at the University of Liverpool, business suites and sports facilities that are in the Premier League of those available in South Liverpool. Most importantly, there is a strong and established educational concept underpinning everything that goes on at ESLA.