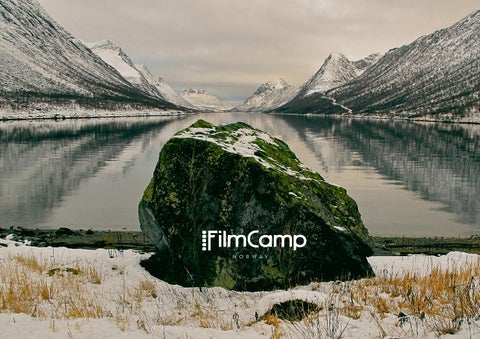 FilmCamp is passionate about making films at the end of the world: the north of Norway. Situated on its own small island in the village of Ă&#x2DC;verbygd, FilmCamp has quickly become one of the most prolific and noticed regional film bodies in Europe. FilmCamp is ideal for sweeping epic dramas, action sequences that require a white, snowy landscape or summer stories set in the midnight sun where only a grand cinematic scope will do.

Around FilmCamp you will find some of the best location attractions in Norway. FilmCamp is located in the middle of Troms County, in a natural setting with a large variety of landscapes and sceneries. Within a distance of an hour from FilmCamp you get it all: the dramatic fjords, the unique coastal line, fishing villages, farmers land, sami settlements, valleys, forests, tundra, big rivers and magic mountains. FilmCamp also offers funding opportunities for film and TV productions to be shot on location in the region â&#x20AC;&#x201C; or in FilmCampâ&#x20AC;&#x2122;s studio.

Studio FilmCamp has a 1800 square metres studio. The Studio is recently upgraded with sound insulation, 60 m greenscreen and workshop for carpenters.

FilmCamp is located on an island in the river and here you have everything you need to create your own universe with all focus on making the best possible film. Makeup, workshops, studio, offices and possible outdoor locations are all within 3 minutes walking distance from the hotel. A large studio (1800 sq. meters) Backlot ■ Workshops and storage rooms ■ 25 offices with internet access ■ Accommodation with hotel standard 52 rooms w/bath and internet access ■ 96 beds in multiple-bed rooms ■ Restaurant with all meals ■ Catering service ■ Bar, sauna, laundry facilities, etc ■ ■

Nature and weather through the year.

January Cold clear days, snow and frost. The sun arrives above the horizon January 10th, but can be seen in the clouds all month.

The average temperature at FilmCamp is -10,2째 Celsius in January.

February The sun is back, but we are still in the middle of the winter. Weather changes between cold clear days and heavy snow falls.

March The best month for enjoying snow, sun and winter activities. Days are longer and the sun starts to warm up the frozen landscape.

The average temperature at FilmCamp is -5,2째 Celsius in March.

April Long days, often with good weather conditions. Lots of snow in the mountains, but at the end of the month it might start to melt in the lowlands.

The average temperature at FilmCamp is -0,2째 Celsius in April.

May In May it does not get dark anymore, and from May 20th the sun stays above the horizon. There is still plenty of snow in the mountains, but in the lowlands it is usually gone. Leaves turn green during the last weeks of May.

The average temperature at FilmCamp is 5,5째 Celsius in May.

June Summer is arriving, but still we can expect everything from snowfall to 25째 Celsius. The sun never sleeps and sometimes it is the same with the people.

July Long days, hopefully with good weather conditions. On July 23rd the sun goes below the horizon for the first time in two months.

August The first stars are welcomed on the night sky. The weather can be nice and warm, but usually we also get the first night with frost in end of August.

The average temperature at FilmCamp is 11,5째 Celsius in August.

The average temperature at FilmCamp is 6,4째 Celsius in September.

October Leaves have fallen of the trees and the frost is making ice on small ponds and in the grass. First snow comes during October, but usually comes and goes a few times before staying.

The average temperature at FilmCamp is 1,4째 Celsius in October.

November Days are getting shorter. Snow arrives and nature is getting ready for the winter sleep. From November 30th the sun stays below the horizon.

The average temperature at FilmCamp is -4,9째 Celsius in November.

December In December the sun never climb above the horizon. It is called “mørketid”, and is dark time, but still this is a time of beautiful light; northern lights, moonlight and many hours of sunrise/sunset colors.

The average temperature at FilmCamp is -8,7° Celsius in December.

Some of the PRODUCTIONS at FilmCamp since 2006 THE KAUTOKEINO REBELLION

THINGS WE DO FOR LOVE

Network Trough our productions we have built up a good network of experienced film workers and producers from the region that is connected to FilmCamp. Filming in Northern Norway often involves challenging conditions and the crew in our network has the experience and local knowledge that makes the work go easy. In addition to typical film workers, we also have people in our network experienced in working with reindeers (big herds and sledding reindeers), sled dogs, wolfs and horses on film sets.

Arctic Action Arctic Action is one of the foremost stunt teams in northern Europe. Based in TromsĂ¸ (Norway) and Reykjavik (Iceland), we are your one stop shop for professional stunt work in the Arctic. With 20+ years experience in the business, including many international productions, we ensure that you get what you need - safely, on time, within budget. Some of what we offer: Stunt services for any production (performers, stunt coordinator, riggers, safety personnel), fight choreography (our specialty), stunt training for actors and extras, pre-production action consulting. All standard stunt equipment incl flying rigs in stock.

Aurora Filmlyd Aurora Filmlyd AS was established in 1995 and is specialized in sound production for film. Aurora Filmlyd does both recording on set and post production. They have all the equipment needed for recording out in the field in arctic Norway, and in TromsĂ¸ they have a complete sound studio ready for 5.1 mixing for TV and cinema. Sound designer Rune Hansen has education in sound from the Norwegian film school and has worked in the company since 1996. Aurora Filmlyd AS is the number one on Film sound in Northern Norway.

Nina Casting & Costumes AS Nina Erdahl is a well established stylist in Northern Norway and have been producing costume design and style concepts for both cultural and commercial use the last ten years. Her background is from London where she worked for seven years in the fashion industry, for instance as a model for various magazines and campaigns like Vogue and Leviâ&#x20AC;&#x2122;s. Back in Norway she started working in the movies and have participated in more than twenty film productions and a few TV-series. Many of these at FilmCamp. The most well known being the NRK TV series Hellfjord, where she was the Casting Director and the movie Glassdukkene where she was the Costume Designer. Nina has her own casting agency with approx 1000 actors, extras and models involved. Nina covers three areas of expertise: casting, costume design and make up. Her customers are mainly from the fashion, advertising and film world. She has also styled plenty of artists and celebrities.

POLAR PARK Arctic Wildlife Center FilmCamp is working together with Polar Park. They are specialized on arctic animals: wolf, brown bear, lynx, wolverine, arctic fox, moose, musk ox, red dear and reindeer. Polar Park puts great emphasize into animal welfare, and offers the animals big areas to make their situation in captivity as natural as possible. Polar Park’s socialization program is unique. For the moment they work with, wolfs, bears and arctic foxes. These socialized animals are accustomed to associate with humans at close range. They are just like wild animals, except from one thing; – they don’t fear humans, and enjoy our company as a part of their natural environment. Experienced animal trainers, socialized animals and the natural environment gives a unique possibility to film animals.

All photos courtesy of FilmCamp. Print production by KOSMOS / Robin Lund .no 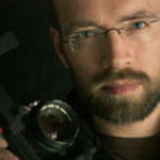