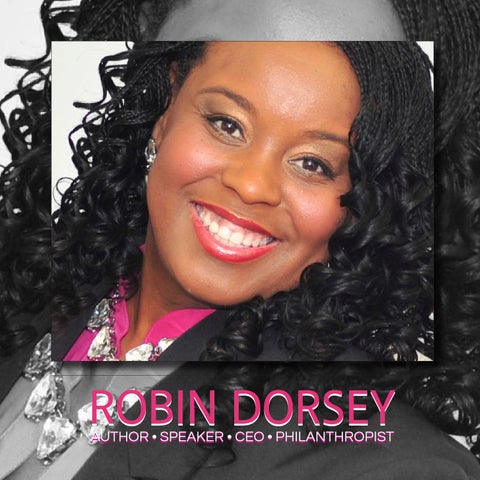 Robin Dorsey is taking the world head on. She is the jack of all trades: CEO, Author, Motivational Speaker, American Diabetes (ADA) Wellness Ambassador, and Advocate. Ms. Dorsey has always been driven to reach the highest mountains. She has an array of professional attributes and talents which includes a MBA in Business Administration with a Concentration in Management from Strayer University, and she is FAC-C Level III Certified in Contracts. She is a lifetime member of Alpha Sigma Lambda National Honor Society. Ms. Dorsey has a drive and a passion about everything she does to no avail, however that is only one of her many gifts and contributions to her family, friends, co-workers, and business associates. Her ultimate goal is to share the knowledge that she has acquired throughout her life as a “Life Coach” to individuals who want to fulfill their goals and dreams in life. Ms. Dorsey is a humble, positive, fun loving, and business savvy woman who will give her last and her all to help a friend or community in need.

“If you dream it, you can achieve it; you just have to believe in it”

Ms. Dorsey is the Author of “A Mother & Daughter Memoirs of Love, Desire, Pain, & Inspiration”. Her late mother Renita T. Mock was the co-author. It was their dream to publish this book together, unfortunately her mom passed away after battling Breast Cancer for two years. This is a poetry book that represents a compilation of poems of “Love, Desire, Pain, & Inspiration” from the views of “a mother and daughter duo Robin T. Dorsey & Renita T. Mock”. Some poems were written for various individuals and some in the eyes of other people from our perspective. The book is available on Amazon.com: http://www.amazon.com/Robin-T-Dorsey/e/B00IKZOEA4 Ms. Dorsey is a Motivational Speaker, she has spoken at numerous venues. She has a passion to give back and to share her knowledge and experiences to help motivate others. She speaks about Business, Diabetes, and gives Motivational Speeches. Here is a list of some of Ms. Dorsey Upcoming Speaking Engagements: • Shirley’s Angel Foundation, March 2014 • Marathon of Excellence Season 2, April 2014 • African American Expo, August 2014 Here is a list of some of Ms. Dorsey Past Speaking Engagements: • NBC 4 Health Fair, January 2014 • American Diabetes Step Out Walk, October 2013 • American Diabetes Step Out Walk, October 2012 • Diabetes Charity Benefit, November 2012 ROBIN DORSEY AUTHOR • SPEAKER • CEO • PHILANTHROPIST

As the CEO of two businesses, Ms. Dorsey is a force to be reckoned with. In December 2013, during Ms. Dorsey’s journey to become a published Author she decided to launch her own publishing company Dorsey Publishing, LLC. She knew that this would be the first book of many and she wanted to leave her legacy and imprint on the world. In addition Ms. Dorsey wants to help other Author’s make their dreams come true. To learn more about Dorsey Publishing visit: www.dorseypublishing.com. In 2011, she founded The Gem’s Social Club, LLC “Gem’s stands for (Going the Extra Mile)”. They provide community service to the DC, MD, and VA area in which they volunteer their time to various Non-profit organizations in need of support. Some of the support they provide include: food drive, clothes drive, toy drive, raising money for the research and the cure to stop various diseases such as Diabetes, Aids, Lupus, Heart, Kidney, Breast Cancer, and many others. They also feed the homeless with So Others May Eat (S.O.M.E). To learn more about The Gem’s Social Club visit: www.thegemssocialclub.com.

Contact Robin For press related inquiries or if you are interested in working with Robin for future speaking engagements, contact her at: 240.416.9671 or send an email to robin@robindorsey.com. @robintdorsey | @dorseypublish | @the_gems_social www.facebook.com/dorseypublishing robintdorsey