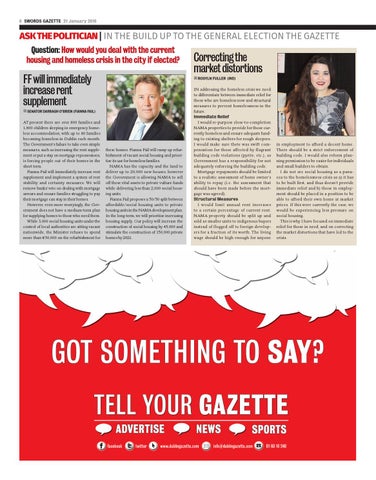 ask the politician | in the build up to the general election the gazette Question: How would you deal with the current housing and homeless crisis in the city if elected?

At present there are over 800 families and 1,600 children sleeping in emergency homeless accommodation, with up to 80 families becoming homeless in Dublin each month. The Government’s failure to take even simple measures, such as increasing the rent supplement or put a stay on mortgage repossessions, is forcing people out of their homes in the short term. Fianna Fail will immediately increase rent supplement and implement a system of rent stability and certainty measures. We will remove banks’ veto on dealing with mortgage arrears and ensure families struggling to pay their mortgage can stay in their homes. However, even more worryingly, the Government does not have a medium-term plan for supplying homes to those who need them. While 3,000 social housing units under the control of local authorities are sitting vacant nationwide, the Minister refuses to spend more than €30,000 on the refurbishment for

these homes. Fianna Fáil will ramp up refurbishment of vacant social housing and prioritise its use for homeless families. NAMA has the capacity and the land to deliver up to 20,000 new houses, however the Government is allowing NAMA to sell off these vital assets to private vulture funds while delivering less than 2,000 social housing units. Fianna Fail proposes a 50/50 split between affordable/social housing units to private housing units in the NAMA development plan. In the long-term, we will prioritise increasing housing supply. Our policy will increase the construction of social housing by 45,000 and stimulate the construction of 150,000 private homes by 2021.

In addressing the homeless crisis we need to differentiate between immediate relief for those who are homeless now and structural measures to prevent homelessness in the future. Immediate Relief I would re-purpose close-to-completion NAMA properties to provide for those currently homeless and ensure adequate funding to existing shelters for rough sleepers. I would make sure thete was swift compensation for those affected by flagrant building code violations (pyrite, etc.), as Government has a responsibility for not adequately enforcing the building code. Mortgage repayments should be limited to a realistic assessment of home owner’s ability to repay (i.e. the assessment that should have been made before the mortgage was agreed). Structural Measures I would limit annual rent increases to a certain percentage of current rent. NAMA property should be split up and sold as smaller units to indigenous buyers instead of flogged off to foreign developers for a fraction of its worth. The living wage should be high enough for anyone

in employment to afford a decent home. There should be a strict enforcement of building code. I would also reform planning permission to be easier for individuals and small builders to obtain. I do not see social housing as a panacea to the homelessness crisis as a) it has to be built first, and thus doesn’t provide immediate relief and b) those in employment should be placed in a position to be able to afford their own home at market prices. If this were currently the case, we would be experiencing less pressure on social housing. This is why I have focused on immediate relief for those in need, and on correcting the market distortions that have led to the crisis.