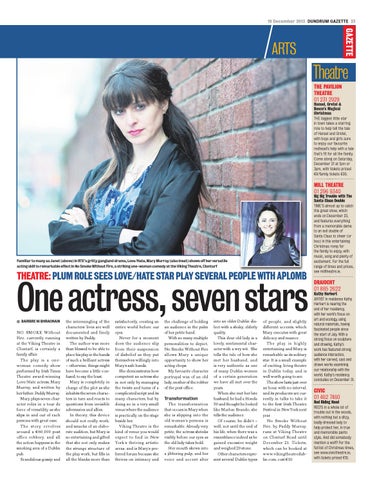 THE biggest little star in town takes a starring role to help tell the tale of Hansel and Gretel, with boys and girls sure to enjoy our favourite redhead’s help with a tale that’s fit for all the family. Come along on Saturday, December 21 at 1pm or 3pm, with tickets priced €8/family tickets €30.

Familiar to many as Janet (above) in RTE’s gritty gangland drama, Love/Hate, Mary Murray (also inset) shows off her versatile acting skill to remarkable effect in No Smoke Without Fire, a striking one-woman comedy at the Viking Theatre, Clontarf

NO SMOKE Without Fire, currently running at the Viking Theatre in Clontarf, is certainly a family affair. The play is a onewoman comedy show performed by Irish Times Theatre award-winning Love/Hate actress, Mary Murray, and written by her father, Paddy Murray. Mary plays seven character roles in a tour de force of versatility as she slips in and out of each persona with great ease. The story revolves around a €60,000 post office robbery, and all the action happens in the smoking area of a Dublin pub. Scandalous gossip and

the intermingling of the characters’ lives are well documented and finely written by Paddy. The author was more than blessed to be able to place his play in the hands of such a brilliant actress – otherwise, things might have become a little confused, to say the least. Mary is completely in charge of the plot as she inhabits the seven characters in turn and reacts to questions from invisible adversaries and allies. In theory, this device should not really work, and smacks of an elaborate audition, but Mary is so entertaining and gifted that she not only makes the strange structure of the play work, but fills in all the blanks more than

satisfactorily, creating an entire world before our eyes. Never for a moment does the audience slip from their suspension of disbelief as they put themselves willingly into Mary’s safe hands. She demonstrates how competent an actress she is, not only by managing the twists and turns of a complicated script and its many characters, but by doing so in a very small venue where the audience is practically on the stage beside her. Viking Theatre is the kind of venue you would expect to find in New York’s thriving artistic areas, and is Mary’s preferred forum because she thrives on intimacy and

the challenge of holding an audience in the palm of her petite hand. With so many multiple personalities to depict, No Smoke Without Fire allows Mary a unique opportunity to show her acting chops. My favourite character portrayal was of an old lady, mother of the robber of the post office.

Transformation The transformation that occurs in Mary when she is slipping into the old woman’s persona is remarkable. Already very petite, the actress shrinks visibly before our eyes as the old lady takes hold. Her mouth skews into a jibbering pulp, and her voice and accent alter

into an older Dublin dialect with a shaky, elderly quality. This dear old lady is a lovely, sentimental character with a wry wit. She tells the tale of how she met her husband, and is very authentic as one of many Dublin women of a certain generation we have all met over the years. When she met her late husband, he had a Honda 50 and thought he looked like Marlon Brando, she tells the audience. Of course, he didn’t – well, not until the end of his life, when there was a resemblance indeed as he gained excessive weight and weighed 20 stone. Other characters represent several Dublin types

of people, and slightly different accents, which Mary executes with great delicacy and nuance. The play is highly entertaining and Mary is remarkable as its solitary star. It is a small example of exciting, living theatre in Dublin today, and is well worth going to see. The show lasts just over an hour, with no interval, and its producers are currently in talks to take it to the first Irish Theatre Festival in New York next year. No Smoke Without Fire, by Paddy Murray, runs at Viking Theatre on Clontarf Road until December 21. Tickets, which can be booked at www.vikingtheatredublin.com, cost €10.

TIME’S almost up to catch this great show, which ends on December 23, and features everything from a memorable dame to an evil double of Santa Claus to cheer (or boo) in this entertaining Christmas romp for the family to enjoy, with music, song and plenty of excitement. For the full range of times and prices, see milltheatre.ie.

ARTIST in residence Kathy Herbert is nearing the end of her residency, with her work’s focus on art and ecology, using natural materials, having fascinated people since the start of July. With a strong focus on sculpture and drawing, Kathy’s work has featured strong audience interaction, with her carved, cast and drawn works examining our relationship with the world. Kathy’s residency concludes on December 31.

RED’S in a whole lot of trouble out in the woods, with nothing but a ditzy, badly-dressed lady to help protect her, in true and memorable panto style. And did somebody mention a wolf? For the full list of Christmas times, see www.civictheatre.ie, with tickets priced €10.