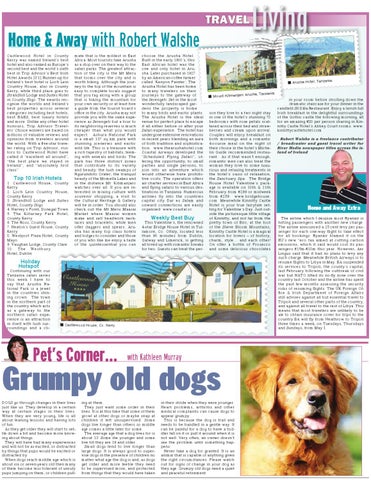 Home & Away with Robert Walshe Castlewood Hotel in County Kerry was named Ireland’s best hotel and also ranked as Europe’s second best and the world’s sixth best in Trip Advisor’s Best Irish Hotel Awards 2012.Runner-up for Ireland’s best hotel is Loch Lein Country House, also in County Kerry, while third place goes to Strandhill Lodge and Suites Hotel in County Sligo. The awards recognise the worlds and Ireland’s best properties across several categories including best hotels, best B&BS, best luxury hotels and more. Unlike any other hotel honours, Trip Advisor Travelers’ Choice winners are based on millions of valuable reviews and opinions from travelers around the world. With a five-star traveler rating on Trip Advisor, visitors to Castlewood Hotel have called it “excellent all around”, “the best place we stayed in Ireland”, and “absolutely first class”.

mate that is the mildest in East Africa. Most tourists take Arusha as a stop over on their way to the safari parks. The greatest attraction of the city is the Mt Meru that looms over the city and is worth hiking. Although the journey to the top of the mountain is easy to complete locals suggest that you tag along with a group that is hiking the mountain for your own security or at least hire a guide from the tourist board’s office in the city. Arusha may not provide you with the same experience as Serengeti but a tour to its neighboring reserves is much cheaper than what you would expect. Ashura National Park is a small 137 sq km park with stunning sceneries and exotic wild life. This is a treasure with a rich tapestry of habitats, teeming with animals and birds. The park has three distinct zones that contribute to its variety and beauty: the lush swamps of Ngurundoto Crater; the tranquil beauty of the Momella Lakes and in the distance Mt. Kilimanjaro watches over all. If you are interested in mixing culture with souvenir shopping, a visit to the Cultural Heritage & Gallery will be in order. You should also check out the Mt Meru Maasai Market where Maasai women make and sell beadwork necklaces and bracelets, while men offer daggers and spears. Arusha has many top class hotels and lodges to consider and those of you who like me enjoy a taste of the quintessential you can

choose the Arusha Hotel. Built in the early 1900’s, this East African hotel was the one and only hotel in Arusha. Later purchased in 1927 by an American coffee farmer called ‘Kenyon Painter’, The Arusha Hotel has been home to many travelers on their journeys to the gateway of the Serengeti. Set in the most wonderfully landscaped gardens the property is home to many birds and exotic plants. The Arusha Hotel is the ideal venue for perfect place to escape it all either before or after your Safari experience. The hotel has undergone extensive renovations in recent years blending an aura of both tradition and sophistication www.thearushahotel.com Coastal Airways developed the “Scheduled Flying Safari”, offering the opportunity, to small parties and single persons, to join into an adventure which would otherwise have prohibitive costs. The operation offers air charter services in East Africa and flying safaris to various destinations in Tanzania. Numerous airlines fly into the countries capital city Dar es Salam and onward connections are easily organised www.coastal.cc

This Valentine’s, the renowned 4-star Bridge House Hotel in Tullamore, Co. Offaly, located less than 90 minutes from Dublin, Galway and Limerick, is getting all loved up with romantic breaks for two. Guests can treat the per-

son they love to a two night stay in one of the hotel’s stunning 70 bedrooms with rose petals scattered across their bed and strawberries and cream upon arrival. Couples will enjoy breakfast on both mornings and a romantic 4-course meal on the night of their choice in the hotel’s Michelin Guide recommended restaurant. As if that wasn’t enough, romantic men can also treat the woman they love to some luxurious and relaxing treatments in the hotel’s oasis of relaxation, the Sanctuary Spa. The Bridge House Hotel Valentine’s package is available on 10th & 11th February from €299 or midweek from €259. www.bridgehouse. com Meanwhile Kinnitty Castle Hotel is your true fairytale setting for Valentine’s Day. Just outside the picturesque little village of Kinnitty, and not far from the pretty town of Birr, at the foot of the Slieve Bloom Mountains, Kinnitty Castle Hotel is a magical location for lovers – of history, charm, style… and each other! On offer a bottle of Prosecco and some delicious chocolates

Continuing with our Tanzania safari series this week I have to say that Arusha National Park is a jewel in the countries shining crown. The town in the northern part of the country which acts as a gateway to the northern safari experience is an attraction in itself with lush surroundings and a cli-

Grumpy old dogs Dogs go through changes in their lives just like us. They develop in a certain way at certain stages in their lives. When they are very young, life is all about leaning lessons and having lots of fun. As they get older they will start to settle down a bit and become more knowing about things. They will have had many experiences and will not be as excited, or distracted by things that pups would be excited or distracted by. When dogs reach middle age which is about six or seven-years old then many of them become less tolerant of unruly pups jumping on them, or children pull-

ing at them. They just want some order in their lives. It is at this time that some of them growl at other dogs or maybe snap at children if left unsupervised. Some dogs live longer than others so middle age comes a little later for some. The average age that a dog lives for is about 13. Some die younger and some live till they are 19 and older. Small dogs tend to live longer than large dogs. It is always good to supervise dogs in the presence of children no matter what age the dog is and, as dogs get older and more feeble they need to be supervised more, and protected from things that they would have taken

in their stride when they were younger. Heart problems, arthritis and other medical complaints can cause dogs to appear grumpy. This is because the dog is frail and needs to be handled in a gentle way. It can be painful for a dog to have a toddler fall on it or pull it around when it is not well. Very often, an owner doesn’t see the problem until something happens. Never take a dog for granted. It is an animal that is capable of anything given the right circumstances. Please watch out for signs of change in your dog as they age. Grumpy old dogs need a quiet and peaceful retirement.

in your room before strolling down the dramatic staircase for your dinner in the candlelit Slí Dála Restaurant. Enjoy a lavish full Irish breakfast in the delightful surroundings of the Gothic castle the following morning, all for an amazing €80 per person sharing in Kinnitty Castle Hotel’s Abbey Court rooms. www. kinnittycastlehotel.com Robert Walshe is a freelance contributor / broadcaster and guest travel writer for River Media newspaper titles across the island of Ireland

Home and Away Extra The airline which I despise most Ryanair is hitting passengers with another new charge. The airline announced a 25 cent levy per passenger for each one-way flight to take effect for all bookings. Ryanair blamed it on the EU’s new “eco tax aimed at cutting carbon emissions, which it said would cost its passengers €15m-€20m this year. However, Aer Lingus said that it had no plans to levy any such charge. Meanwhile British Airways is to resume flights to Libya in May. BA suspended its services to Tripoli, the county’s capital, last February following the outbreak of civil war but NATO lifted its no-fly zone over the country last October and the airline has spent the past few months assessing the security risks of resuming flights. The UK Foreign Office & Irish Department of Foreign Affairs still advises against all but essential travel to Tripoli and several other parts of the country, and against all travel to the rest of Libya. This means that most travelers are unlikely to be ale to obtain insurance cover for trips to the country.BA will fly from Heathrow to Tripoli three times a week, on Tuesdays, Thursdays and Sundays, from May 1. 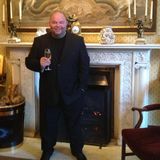