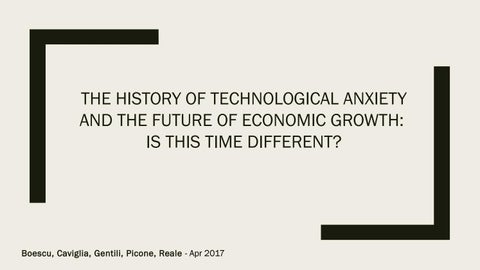 THE HISTORY OF TECHNOLOGICAL ANXIETY AND THE FUTURE OF ECONOMIC GROWTH: IS THIS TIME DIFFERENT?

Technological Progress... ■ Is widely considered the main source of economic progress ■ Has been described as: alien, incomprehensible, increasingly powerful and threatening and possibly uncontrollable The Myth of Prometheus and Fire: The uncontrollable effects of technology advances

Can understanding history provide a perspective on whether this time around will be different?

Anxiety over Technology from the Industrial Revolution to the Great Depression ■

Analysis of the role of these three forms of anxiety during two major periods of Technological Progress:  –

Short-Term Disruption, Long-Term Benefits From the late 18th and early 19th century: the beginning of the Industrial Revolution… ■

Short run: Displacement of Labor “substitution of machinery for human labour is often very injurious to the interests of the class of labourers . . . [It] may render the population redundant" (Ricardo, 1821)

Long run: Increased productivity and prosperity Technological improvements as part of a social and political process that would lead eventually to widespread prosperity. (Marx)

What did really happen? ■

The technological progress also took the form of product innovation and it created entirely new sectors for the economy which required new job categories.

Similar theories reappeared during the Great Depression over the effects of labor-saving changes, (particularly in agricultural sector)

“We are suffering, not from the rheumatics of old age, but from the growing-pains of over-rapid changes” (Keynes, 1930)

Technology and the Alienation of Labor ■

Performing the same simple operations bring the human being to degradation (Smith, 1776)

and the capitalist system alienates individuals from others and themselves (Marx, 1844)

Physical separation of the place-of-work from place-of-leisure

The disappearance of “moral economy”, making room for “market economy”

Historical Perspectives on a Horizon for Technological Progress ■

During the Enlightenment: Progress included material progress, or what we would think of today as economic growth

… Have we already picked all the low-hanging fruit?

Technology and the End of Work? ■

During the Industrial Revolution, technology acted as a substitute for human/animal strength

Large sections of the labor market to be hollowed out (Katz and Margo, 2013)

The robotic productivity as a complete substitute for labor (Sachs, Benzell, and LaGarda, 2015)

Tech and the Characteristics of Work Changes in the job market

Greater flexibility in when and where work takes place

Employees are expected to be always accessible

And competition between firms/nations will stimulate technological efforts

Economic principles will continue to operate ■

Path of transition may be disruptive and painful

Words of Wisdom “We tend to overestimate the effect of a technology in the short run and underestimate the effect in the long run.” (Roy Amara) “Meanwhile there will be no harm in making mild preparations for our destiny, in encouraging, and experimenting in, the arts of life as well as the activities of purpose.” (Keynes, 1930)

The technological progress is an engine of development

We are facing the same short run effect we suffered during the first Industrial Revolution Countermeasures suggested by tech entrepreneurs: ■

How to make it possible? ■ International Collaborations ■ Role of the Governments EU: Rejected proposal to regulate the rise of robots (February, 2017) US: Steven Mnuchin, the US Secretary of Treasury, stated [On A.I. supplanting human jobs] "It is not even on our radar screen […] 50-100 more years" away. "I'm not worried at all [about] robots displacing humans in the near future” (24th March 2017) 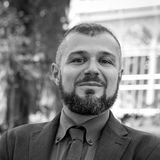 The History of Technological Anxiety and the Future of Economic Growth: Is This Time Different?

The History of Technological Anxiety and the Future of Economic Growth: Is This Time Different?