Music for the eyes - Chapter on Silent Visual Music 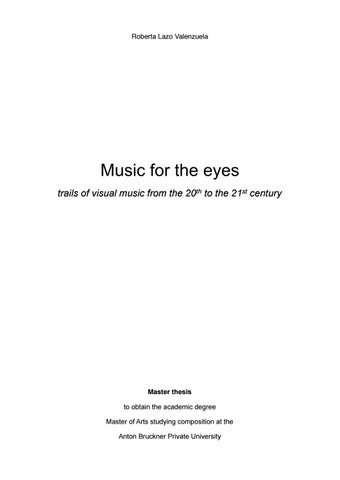 1. Silence as platform for musical experience Both music and arts have used silence as a statement, but in some cases, silence has become a manifestation of a point zero, a return to the basics and most essential. Considering this idea, it is not surprising that several of the visual music artists that had worked for many years synchronizing music to their films, had at some point the need to compose a silent piece. This phenomenon has not being closely looked at in visual music for which I hope these few examples open the question to some researchers and artists.

Since music is built on sound, the role of silence in a music composition consists usually on increasing and releasing tension but also on separating sections. It is actually through silence that we can recognize a structure, as it marks the end of a movement and the beginning of another. This is key for the communication between audience and musicians. Only when the audience is completely quiet, the musicians can start playing. And vice versa, when the musicians are finished, they hold the pause and then release giving the cue to the audience to clap and close the circle of the concert ritual. A pause provides as well information about the interpretation of the piece. A musician can organize the phrase, give emphasis in specific moments and change the character of the interpretation, thanks to these particular pauses. But this dynamic belongs to a hierarchical organization of things that respond to the values and aspirations of the western mentality. In music, â&amp;#x20AC;&amp;#x153;western society dictated that things happening at the &quot;center&quot; of an orchestra concert were inherently more important than things happening in the audience.â&amp;#x20AC;?

the composers have dared to disrupt this traditional order by confronting it directly and putting it in the artwork. Silence remains one of the most controversial and misinterpreted topics.

Even though silent music has been existing already some centuries ago (thinking on the silent pieces of visual music and some religious silent music of the renaissance2 ), the preconceived expectations of the centralist normative of the concert together with the fix notion “that music was made by musicians using traditional instruments to perform structured and prearranged compositions”,

still prevails over the idea of silence as

platform for a musical experience. In consequence, the works that introduce silence as a key factor in the piece are usually destined to be misread or misunderstood. Such are the cases of “Silent Music” (1941) by Raymond Scott’s (1908-1994) and the later “4’33” (1952) by John Cage (1912-1992). Scott’s piece can only be imagined through the brief description of a Time magazine reporter in 1941, who wrote: &quot;The band was going through all the motions: the swart, longish-haired leader led away; the brasses, the saxophones, the clarinets made a great show of fingering and blowing. This, explained leader Raymond Scott, was silent music.” 4 Raymond Scott, who was mostly composing for Warner Brothers, appears to have given up on the idea, leaving no recording or documentation of the piece. If were not for this critic, we would maybe not even know of its existence and Cage would have been the first to fall on deaf ears. Later in 1952, after suffering the audience’s giggles and laughs at the premiere of 4’33, the composer confessed: &quot;They missed the point. There’s no such thing as silence. What they thought was silence, because they didn’t know how to listen, was full of accidental sounds.”

Indeed, the question of silence arises almost in any silent piece, for the

experience of it is rarely perceived in awareness and when realized, it is usually interrupted under the common social judgement of “awkward silence”. Now, having multiple books, articles and blogs, not to mention the extensive amount of quotes and reference to the piece, silent music (and prolonged silence) continues to be somehow controversial and un-comprehended. 2

It has been now explained that silence can have many meanings depending on the purpose, context, and format of the piece. For the radical 4’33, it was clearly “an act of framing, of enclosing environmental and unintended sounds in a moment of attention in order to open the mind to the fact that all sounds are music.”

But in the case of Scott’s

13-piece orchestra, it was a music expressed through actions and movement, leaving it all to the imagination and engagement of the audience. This is a great example of a music composed on the idea of the inner-sound — a sequence of gestures of simultaneous or single individuals that delivered altogether a silent visual music.

Silent visual music has been briefly mentioned in more than one review and article, usually as a poetic conclusion of a study case, never the less, there are no focused studies about it and no real acknowledgement of these pieces. The already paradoxical concept of music in silence, silence as music and other related philosophical-artistic questions (conflicts that rise from silent music alone), make even more complex the topic of silent visual music. To unravel this, it would be necessary to dedicate a research that focuses entirely on the subject. For the purposes of this research, I will just mention a few examples of silent visual music, acknowledging this practice as a branch of visual music.

1.2.1 The silent Lumia of Thomas Wilfred The invention of the Clavilux in 1919 came hand in hand with the emergence of the art of Lumia. Wilfred’s idea was perhaps too advanced for his time —even nowadays, it seems to be misunderstood and not entirely appreciated— but thanks to his persistency and enormous dedication, his work is being rescued, rediscovered and reconsidered. It appears to be that the Lumia pieces were the beginning of silent visual music, a small and evidently little known current that somehow managed to go under the radar even during the most strange and schizophrenic moments of arts and music history. As most light artists, Wilfred came from the musical realm and as it usually happens with former musicians, this background appears in the work, even if the subject is not about 6

music, or has anything to do with sound. It manifests itself in the subtleties, the characteristic development of temporality, the essence and atmosphere that creates, or in the compositional approach. It is not just in the titles of his pieces, (“Elliptical Prelude and Chalice”, “Lumia Suite” or “Nocturne”, to mention a few), added to the fact that all the works of Wilfred are organized and numbered by Opus7, but also in the evident implied musicality of the pieces. The delicate strokes of light that create at times counterpoints that slowly change their form until resolving together in a tonic. In other moments, the thick harmonies appeared in masses of color, which move from one chord to the other like a choral. Sometimes these condense stains work as a ground for a subtle thin ephemeral shape to float, resembling a shy melody. In the words of The New York Times Magazine: “Wilfred could organize a Lumia composition as carefully as any musician ever organized a symphony, translating the musical elements of tempo, rhythm, key, theme, and contrapuntal structure into colors that rise, fall, blend, separate, fade, glow, and reshape themselves according to plan.”

Unfortunately, in the same publication, the reporter

questions the silent factor of the pieces and suggests the inclusion of sound (not music) to the Lumia. In my opinion, this proposal would not only distract from the actual composition that Wilfred carefully made, but it would also disallow the audience to experience a truly subjective music, one that is triggered by what is seen and heard only in the individuality of the imagination: the inner-sounds.

Thomas Wilfred was known to be a reserved and perfectionist man, to which the mysterious quality of his works fit not only to his personality but to the evanescent essence of light. The visitors usually enter this silent and dark atmosphere with no previous knowledge of the work or the artist, only to be confronted with the delicate and subtle Lumia that grants little or no information, but somehow contains and supports itself as a pure art work, which was what Wilfred wanted: a self-sufficient art. I find in this a direct link with absolute music, music that is not about anything else but itself —a close circuit that refers to itself and manifests in the simplicity of its own form. Now, what is interesting is that within this purity, Wilfred is reaching multiple arts and discourses. Starting with the presentation of the work, a silent and dark space, both being synonyms of image and sound, to the use of technology in service of the arts, which would be later an own genre. But Wilfred, I assume without any ambition of being a pioneer or breaking through the normative of art history, does not categorize his work. Instead he continues composing light and calling it by his own criteria: Lumia.

1.2.2 Silent visual music films The pioneers of visual music have been mainly acclaimed for their contributions to film and interdisciplinary art. But while the analysis of their works is based on special techniques and a pronounced correlation between music and sound, the silent works of these artists remain overlooked. In film, the element of silence is usually included in the description of a piece together with the technical features, to which, it is frequently understood as an aspect of secondary order. Due to this —or perhaps because it is often misinterpreted or linked to a technicality — silent visual music has not been properly investigated, nor observed as a particular and recurrent phenomenon of visual music. Although the visual music pieces that intentionally use silence are very few, they are also not entirely insignificant. They emerge, apparently from a common personal need of change after having worked for long periods of time with synchronized visualization of music. These are the cases of the previously mentioned “Radio Dynamics” and “Spirals” by Fischinger. “Radio Dynamics” has been considered “Fischinger&#39;s best film, the work in which he most perfectly joined his craftsmanship with his spiritual ideas into a meaningful and

The intentional silence, which is specifically stipulated in the

first frames, provides key information on how to approach the film. The images that Fischinger presents have an independent intention and are not to be restricted by preconceived music. In fact, the point of the piece has nothing to do with music. On the contrary, it is connected to a spiritual aim, to reach a “psychological effect throughout is pleasurable“. As he mentioned in a letter before the film was even finished: “The Static, the passive observations of former color science, will be superseded by the Dynamic. This step corresponds to penetrating from the surface into the depths.” 10 The Whitney brother’s film “Twenty-Four Variations on an Original Theme”, which was based on Schoenberg’s serialist theories, was also conceived in silence. Like Wilfred’s works, the visual composition responds to a musical structure, that in this case suits to the musical ideas of the modernity: “the silent images performed a cogent dynamic on their own, and the intimate format of the film gave the feel of exquisite chamber music.” 11 The intentional use of silence in the visual music films -from this are excluded the silent films of the beginning of the century, which were usually thought to be played with live music- continues to be an unresolved paradox for many, although even now, some artists insist on exploring the silent visual connection. It would be interesting to inquiry more deeply into this particular phenomenon: why do artists and musicians seek silence to express music? Is there perhaps a kind of music that can only exist in silence?

Music for the eyes - Chapter on Silent Visual Music

Chapter on my visual music research.