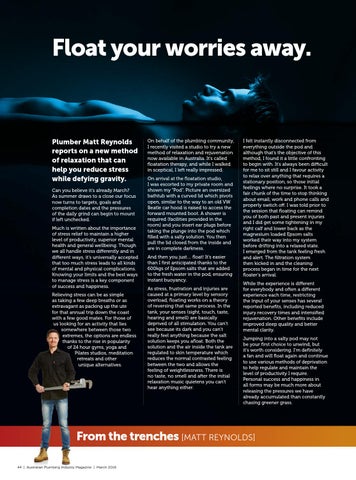 Float your worries away.

Plumber Matt Reynolds reports on a new method of relaxation that can help you reduce stress while defying gravity. Can you believe it’s already March? As summer draws to a close our focus now turns to targets, goals and completion dates and the pressures of the daily grind can begin to mount if left unchecked. Much is written about the importance of stress relief to maintain a higher level of productivity, superior mental health and general wellbeing. Though we all handle stress differently and in different ways, it’s universally accepted that too much stress leads to all kinds of mental and physical complications. Knowing your limits and the best ways to manage stress is a key component of success and happiness. Relieving stress can be as simple as taking a few deep breaths or as extravagant as packing up the ute for that annual trip down the coast with a few good mates. For those of us looking for an activity that lies somewhere between those two extremes, the options are endless thanks to the rise in popularity of 24 hour gyms, yoga and Pilates studios, meditation retreats and other unique alternatives.

On behalf of the plumbing community, I recently visited a studio to try a new method of relaxation and rejuvenation now available in Australia. It’s called floatation therapy, and while I walked in sceptical, I left really impressed. On arrival at the floatation studio, I was escorted to my private room and shown my “Pod”. Picture an oversized bathtub with a curved lid which pivots open, similar to the way to an old VW Beatle car hood is raised to access the forward mounted boot. A shower is required (facilities provided in the room) and you insert ear plugs before taking the plunge into the pod which filled with a salty solution. You then pull the lid closed from the inside and are in complete darkness. And then you just… float! It’s easier than I first anticipated thanks to the 600kgs of Epsom salts that are added to the fresh water in the pod, ensuring instant buoyancy. As stress, frustration and injuries are caused at a primary level by sensory overload, floating works on a theory of reversing that same process. In the tank, your senses (sight, touch, taste, hearing and smell) are basically deprived of all stimulation. You can’t see because its dark and you can’t really feel anything because the salt solution keeps you afloat. Both the solution and the air inside the tank are regulated to skin temperature which reduces the normal contrasted feeling between the two and allows the feeling of weightlessness. There is no taste, no smell and after the initial relaxation music quietens you can’t hear anything either.

I felt instantly disconnected from everything outside the pod and although that’s the objective of this method, I found it a little confronting to begin with. It’s always been difficult for me to sit still and I favour activity to relax over anything that requires a stationary position, so those initial feelings where no surprise. It took a fair chunk of the time to stop thinking about email, work and phone calls and properly switch off. I was told prior to the session that floating can remind you of both past and present injuries and I did get some tightening in my right calf and lower back as the magnesium loaded Epsom salts worked their way into my system before drifting into a relaxed state. I emerged from the tank feeling fresh and alert. The filtration system then kicked in and the cleaning process began in time for the next floater’s arrival. While the experience is different for everybody and often a different experience each time, restricting the input of your senses has several reported benefits, including reduced injury recovery times and intensified rejuvenation. Other benefits include improved sleep quality and better mental clarity. Jumping into a salty pod may not be your first choice to unwind, but it’s worth considering. I’m definitely a fan and will float again and continue to use various methods of deprivation to help regulate and maintain the level of productivity I require. Personal success and happiness in all forms may be much more about releasing the pressures we have already accumulated than constantly chasing greener grass. For over 25 years, Australian Plumbing has been the industry’s leading publication, delivering independent coverage of news and events.

For over 25 years, Australian Plumbing has been the industry’s leading publication, delivering independent coverage of news and events.