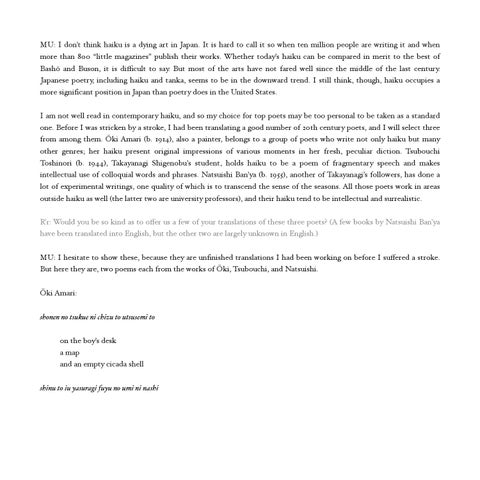 MU: I don’t think haiku is a dying art in Japan. It is hard to call it so when ten million people are writing it and when more than 800 “little magazines” publish their works. Whether today’s haiku can be compared in merit to the best of Bashō and Buson, it is diﬃcult to say. But most of the arts have not fared well since the middle of the last century. Japanese poetry, including haiku and tanka, seems to be in the downward trend. I still think, though, haiku occupies a more significant position in Japan than poetry does in the United States. I am not well read in contemporary haiku, and so my choice for top poets may be too personal to be taken as a standard one. Before I was stricken by a stroke, I had been translating a good number of 20th century poets, and I will select three from among them. Ōki Amari (b. 1914), also a painter, belongs to a group of poets who write not only haiku but many other genres; her haiku present original impressions of various moments in her fresh, peculiar diction. Tsubouchi Toshinori (b. 1944), Takayanagi Shigenobu’s student, holds haiku to be a poem of fragmentary speech and makes intellectual use of colloquial words and phrases. Natsuishi Ban’ya (b. 1955), another of Takayanagi’s followers, has done a lot of experimental writings, one quality of which is to transcend the sense of the seasons. All those poets work in areas outside haiku as well (the latter two are university professors), and their haiku tend to be intellectual and surrealistic. R’r: Would you be so kind as to oﬀer us a few of your translations of these three poets? (A few books by Natsuishi Ban’ya have been translated into English, but the other two are largely unknown in English.) MU: I hesitate to show these, because they are unfinished translations I had been working on before I suﬀered a stroke. But here they are, two poems each from the works of Ōki, Tsubouchi, and Natsuishi. Ōki Amari: shonen no tsukue ni chizu to utsusemi to & & &