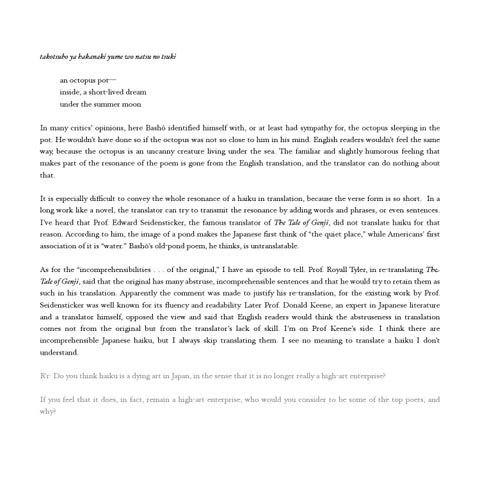 takotsubo ya hakanaki yume wo natsu no tsuki & &

an octopus pot— inside, a short-lived dream

under the summer moon

In many critics’ opinions, here Bashō identified himself with, or at least had sympathy for, the octopus sleeping in the pot. He wouldn’t have done so if the octopus was not so close to him in his mind. English readers wouldn’t feel the same way, because the octopus is an uncanny creature living under the sea. The familiar and slightly humorous feeling that makes part of the resonance of the poem is gone from the English translation, and the translator can do nothing about that. It is especially diﬃcult to convey the whole resonance of a haiku in translation, because the verse form is so short. In a long work like a novel, the translator can try to transmit the resonance by adding words and phrases, or even sentences. I’ve heard that Prof. Edward Seidensticker, the famous translator of The Tale of Genji, did not translate haiku for that reason. According to him, the image of a pond makes the Japanese first think of “the quiet place,” while Americans’ first association of it is “water.” Bashō’s old-pond poem, he thinks, is untranslatable. As for the “incomprehensibilities . . . of the original,” I have an episode to tell. Prof. Royall Tyler, in re-translating The Tale of Genji, said that the original has many abstruse, incomprehensible sentences and that he would try to retain them as such in his translation. Apparently the comment was made to justify his re-translation, for the existing work by Prof. Seidensticker was well known for its fluency and readability. Later Prof. Donald Keene, an expert in Japanese literature and a translator himself, opposed the view and said that English readers would think the abstruseness in translation comes not from the original but from the translator’s lack of skill. I’m on Prof Keene’s side. I think there are incomprehensible Japanese haiku, but I always skip translating them. I see no meaning to translate a haiku I don’t understand. R’r: Do you think haiku is a dying art in Japan, in the sense that it is no longer really a high-art enterprise? If you feel that it does, in fact, remain a high-art enterprise, who would you consider to be some of the top poets, and why?