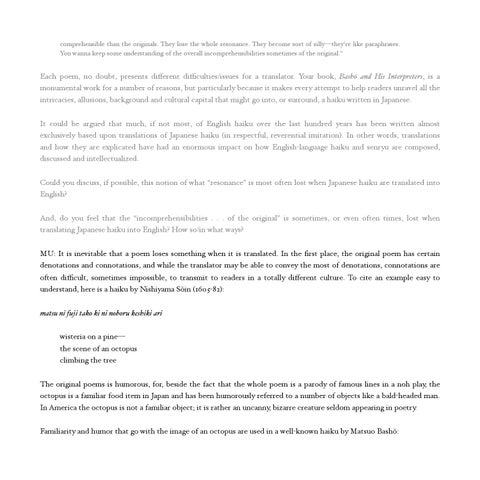 comprehensible than the originals. They lose the whole resonance. They become sort of silly—they're like paraphrases. You wanna keep some understanding of the overall incomprehensibilities sometimes of the original.”

Each poem, no doubt, presents diﬀerent diﬃculties/issues for a translator. Your book, Bashō and His Interpreters, is a monumental work for a number of reasons, but particularly because it makes every attempt to help readers unravel all the intricacies, allusions, background and cultural capital that might go into, or surround, a haiku written in Japanese. It could be argued that much, if not most, of English haiku over the last hundred years has been written almost exclusively based upon translations of Japanese haiku (in respectful, reverential imitation). In other words, translations and how they are explicated have had an enormous impact on how English-language haiku and senryu are composed, discussed and intellectualized.  Could you discuss, if possible, this notion of what “resonance” is most often lost when Japanese haiku are translated into English? And, do you feel that the “incomprehensibilities . . . of the original” is sometimes, or even often times, lost when translating Japanese haiku into English? How so/in what ways? MU: It is inevitable that a poem loses something when it is translated. In the first place, the original poem has certain denotations and connotations, and while the translator may be able to convey the most of denotations, connotations are often diﬃcult, sometimes impossible, to transmit to readers in a totally diﬀerent culture. To cite an example easy to understand, here is a haiku by Nishiyama Sōin (1605-82): matsu ni fuji tako ki ni noboru keshiki ari &

wisteria on a pine—

the scene of an octopus climbing the tree

The original poems is humorous, for, beside the fact that the whole poem is a parody of famous lines in a noh play, the octopus is a familiar food item in Japan and has been humorously referred to a number of objects like a bald-headed man. In America the octopus is not a familiar object; it is rather an uncanny, bizarre creature seldom appearing in poetry. Familiarity and humor that go with the image of an octopus are used in a well-known haiku by Matsuo Bashō: