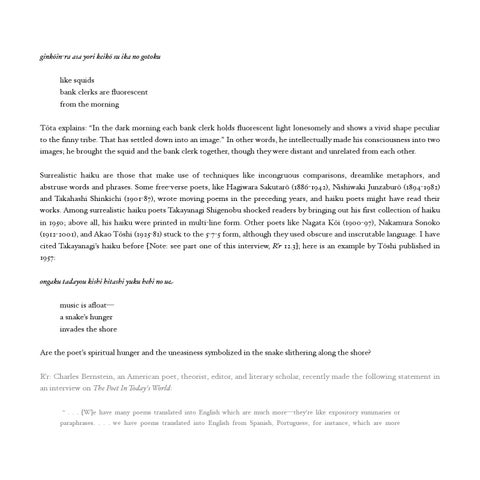 Tōta explains: “In the dark morning each bank clerk holds fluorescent light lonesomely and shows a vivid shape peculiar to the finny tribe. That has settled down into an image.” In other words, he intellectually made his consciousness into two images; he brought the squid and the bank clerk together, though they were distant and unrelated from each other. Surrealistic haiku are those that make use of techniques like incongruous comparisons, dreamlike metaphors, and abstruse words and phrases. Some free-verse poets, like Hagiwara Sakutarō (1886-1942), Nishiwaki Junzaburō (1894-1982) and Takahashi Shinkichi (1901-87), wrote moving poems in the preceding years, and haiku poets might have read their works. Among surrealistic haiku poets Takayanagi Shigenobu shocked readers by bringing out his first collection of haiku in 1950; above all, his haiku were printed in multi-line form. Other poets like Nagata Kōi (1900-97), Nakamura Sonoko (1912-2001), and Akao Tōshi (1925-81) stuck to the 5-7-5 form, although they used obscure and inscrutable language. I have cited Takayanagi’s haiku before [Note: see part one of this interview, R’r 12.3]; here is an example by Tōshi published in 1957: ongaku tadayou kishi hitashi yuku hebi no ue & &

music is afloat— a snake’s hunger

Are the poet’s spiritual hunger and the uneasiness symbolized in the snake slithering along the shore? R’r: Charles Bernstein, an American poet, theorist, editor, and literary scholar, recently made the following statement in an interview on The Poet In Today's World: “ . . . [W]e have many poems translated into English which are much more—they're like expository summaries or paraphrases. . . . we have poems translated into English from Spanish, Portuguese, for instance, which are more