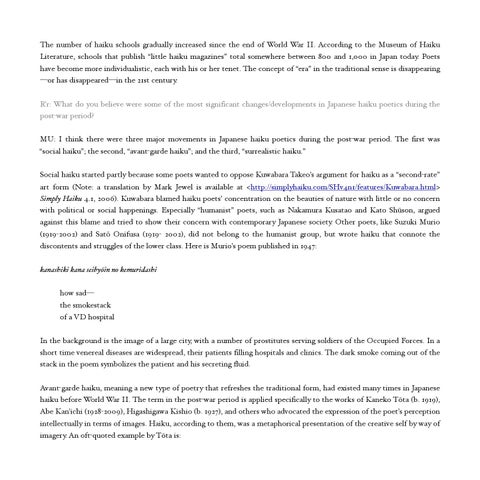 The number of haiku schools gradually increased since the end of World War II. According to the Museum of Haiku Literature, schools that publish “little haiku magazines” total somewhere between 800 and 1,000 in Japan today. Poets have become more individualistic, each with his or her tenet. The concept of “era” in the traditional sense is disappearing —or has disappeared—in the 21st century. R’r: What do you believe were some of the most significant changes/developments in Japanese haiku poetics during the post-war period? MU: I think there were three major movements in Japanese haiku poetics during the post-war period. The first was “social haiku”; the second, “avant-garde haiku”; and the third, “surrealistic haiku.” Social haiku started partly because some poets wanted to oppose Kuwabara Takeo’s argument for haiku as a “second-rate” art form (Note: a translation by Mark Jewel is available at <http://simplyhaiku.com/SHv4n1/features/Kuwabara.html> Simply Haiku 4.1, 2006). Kuwabara blamed haiku poets’ concentration on the beauties of nature with little or no concern with political or social happenings. Especially “humanist” poets, such as Nakamura Kusatao and Kato Shūson, argued against this blame and tried to show their concern with contemporary Japanese society. Other poets, like Suzuki Murio (1919-2002) and Satō Onifusa (1919- 2002), did not belong to the humanist group, but wrote haiku that connote the discontents and struggles of the lower class. Here is Murio’s poem published in 1947: kanashiki kana seibyōin no kemuridashi &

the smokestack of a VD hospital

In the background is the image of a large city, with a number of prostitutes serving soldiers of the Occupied Forces. In a short time venereal diseases are widespread, their patients filling hospitals and clinics. The dark smoke coming out of the stack in the poem symbolizes the patient and his secreting fluid. Avant-garde haiku, meaning a new type of poetry that refreshes the traditional form, had existed many times in Japanese haiku before World War II. The term in the post-war period is applied specifically to the works of Kaneko Tōta (b. 1919), Abe Kan’ichi (1928-2009), Higashigawa Kishio (b. 1927), and others who advocated the expression of the poet’s perception intellectually in terms of images. Haiku, according to them, was a metaphorical presentation of the creative self by way of imagery. An oft-quoted example by Tōta is: