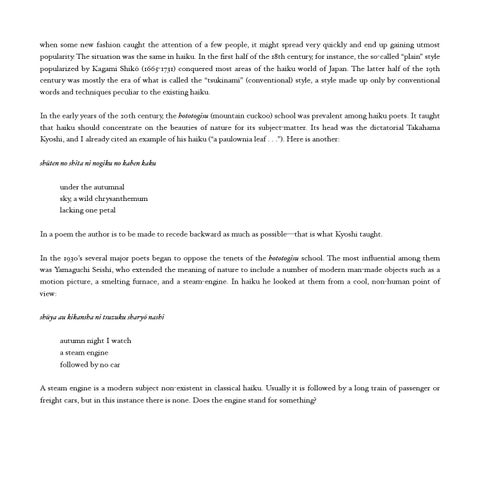 when some new fashion caught the attention of a few people, it might spread very quickly and end up gaining utmost popularity. The situation was the same in haiku. In the first half of the 18th century, for instance, the so-called “plain” style popularized by Kagami Shikō (1665-1731) conquered most areas of the haiku world of Japan. The latter half of the 19th century was mostly the era of what is called the “tsukinami” (conventional) style, a style made up only by conventional words and techniques peculiar to the existing haiku. In the early years of the 20th century, the hototogisu (mountain cuckoo) school was prevalent among haiku poets. It taught that haiku should concentrate on the beauties of nature for its subject-matter. Its head was the dictatorial Takahama Kyoshi, and I already cited an example of his haiku (“a paulownia leaf . . .”). Here is another: shūten no shita ni nogiku no kaben kaku & & &

under the autumnal sky, a wild chrysanthemum lacking one petal

In a poem the author is to be made to recede backward as much as possible—that is what Kyoshi taught. In the 1930’s several major poets began to oppose the tenets of the hototogisu school. The most influential among them was Yamaguchi Seishi, who extended the meaning of nature to include a number of modern man-made objects such as a motion picture, a smelting furnace, and a steam-engine. In haiku he looked at them from a cool, non-human point of view: shūya au kikansha ni tsuzuku sharyō nashi & &

followed by no car

A steam engine is a modern subject non-existent in classical haiku. Usually it is followed by a long train of passenger or freight cars, but in this instance there is none. Does the engine stand for something?