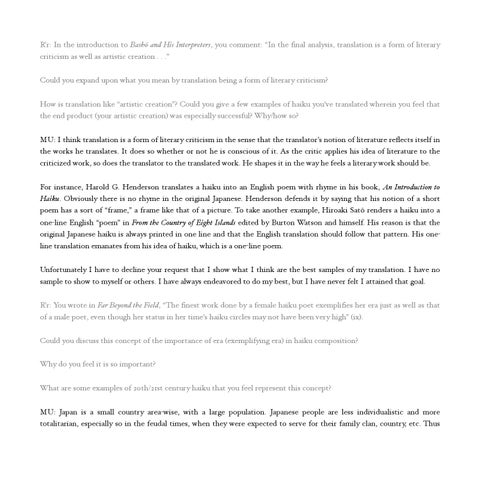 R’r: In the introduction to Bashō and His Interpreters, you comment: “In the final analysis, translation is a form of literary criticism as well as artistic creation . . .” Could you expand upon what you mean by translation being a form of literary criticism? How is translation like “artistic creation”? Could you give a few examples of haiku you've translated wherein you feel that the end product (your artistic creation) was especially successful? Why/how so? MU: I think translation is a form of literary criticism in the sense that the translator’s notion of literature reflects itself in the works he translates. It does so whether or not he is conscious of it. As the critic applies his idea of literature to the criticized work, so does the translator to the translated work. He shapes it in the way he feels a literary work should be. For instance, Harold G. Henderson translates a haiku into an English poem with rhyme in his book, An Introduction to Haiku. Obviously there is no rhyme in the original Japanese. Henderson defends it by saying that his notion of a short poem has a sort of “frame,” a frame like that of a picture. To take another example, Hiroaki Satō renders a haiku into a one-line English “poem” in From the Country of Eight Islands edited by Burton Watson and himself. His reason is that the original Japanese haiku is always printed in one line and that the English translation should follow that pattern. His oneline translation emanates from his idea of haiku, which is a one-line poem. Unfortunately I have to decline your request that I show what I think are the best samples of my translation. I have no sample to show to myself or others. I have always endeavored to do my best, but I have never felt I attained that goal. R’r: You wrote in Far Beyond the Field, “The finest work done by a female haiku poet exemplifies her era just as well as that of a male poet, even though her status in her time's haiku circles may not have been very high” (ix). Could you discuss this concept of the importance of era (exemplifying era) in haiku composition? Why do you feel it is so important? What are some examples of 20th/21st century haiku that you feel represent this concept? MU: Japan is a small country area-wise, with a large population. Japanese people are less individualistic and more totalitarian, especially so in the feudal times, when they were expected to serve for their family clan, country, etc. Thus