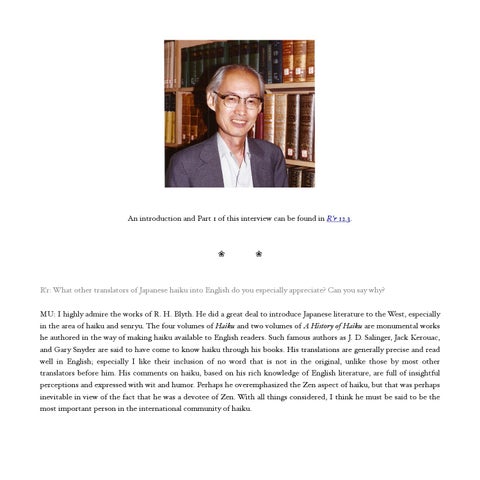 An introduction and Part 1 of this interview can be found in R'r 12.3.

R’r: What other translators of Japanese haiku into English do you especially appreciate? Can you say why? MU: I highly admire the works of R. H. Blyth. He did a great deal to introduce Japanese literature to the West, especially in the area of haiku and senryu. The four volumes of Haiku and two volumes of A History of Haiku are monumental works he authored in the way of making haiku available to English readers. Such famous authors as J. D. Salinger, Jack Kerouac, and Gary Snyder are said to have come to know haiku through his books. His translations are generally precise and read well in English; especially I like their inclusion of no word that is not in the original, unlike those by most other translators before him. His comments on haiku, based on his rich knowledge of English literature, are full of insightful perceptions and expressed with wit and humor. Perhaps he overemphasized the Zen aspect of haiku, but that was perhaps inevitable in view of the fact that he was a devotee of Zen. With all things considered, I think he must be said to be the most important person in the international community of haiku.