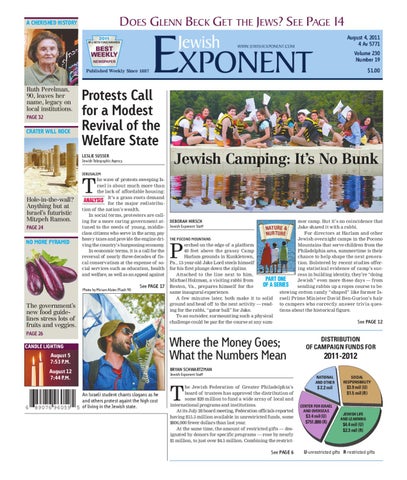 DOES GLENN BECK GET THE JEWS? SEE PAGE 14

Protests Call for a Modest Revival of the Welfare State

he wave of protests sweeping Israel is about much more than the lack of affordable housing: It’s a grass-roots demand ANALYSIS for the major redistribution of the nation’s wealth. In social terms, protesters are calling for a more caring government attuned to the needs of young, middleclass citizens who serve in the army, pay heavy taxes and provide the engine driving the country’s burgeoning economy. In economic terms, it is a call for the reversal of nearly three decades of fiscal conservatism at the expense of social services such as education, health and welfare, as well as an appeal against

T Hole-in-the-wall? Anything but at Israel’s futuristic Mitzpeh Ramon. PAGE 24

mer camp. But it’s no coincidence that Jake shared it with a rabbi. For directors at Harlam and other Jewish overnight camps in the Pocono THE POCONO MOUNTAINS erched on the edge of a platform Mountains that serve children from the 40 feet above the grassy Camp Philadelphia area, summertime is their Harlam grounds in Kunkletown, chance to help shape the next generaPa., 13-year-old Jake Lord steels himself tion. Bolstered by recent studies offerfor his first plunge down the zipline. ing statistical evidence of camp’s sucAttached to the line next to him, cess in building identity, they’re “doing PART ONE Michael Holzman, a visiting rabbi from Jewish” even more these days — from OF A SERIES Reston, Va., prepares himself for the sending rabbis up a ropes course to besame inaugural experience. stowing cotton candy “shaped” like former IsA few minutes later, both make it to solid raeli Prime Minister David Ben-Gurion’s hair ground and head off to the next activity — read- to campers who correctly answer trivia quesing for the rabbi, “gator ball” for Jake. tions about the historical figure. To an outsider, surmounting such a physical challenge could be par for the course at any sumSee PAGE 12 Jewish Exponent Staff

Where the Money Goes; What the Numbers Mean

DISTRIBUTION OF CAMPAIGN FUNDS FOR

An Israeli student chants slogans as he and others protest againt the high cost of living in the Jewish state.

he Jewish Federation of Greater Philadelphia’s board of trustees has approved the distribution of some $20 million to fund a wide array of local and international programs and institutions. At its July 28 board meeting, Federation officials reported having $15.5 million available in unrestricted funds, some $806,000 fewer dollars than last year. At the same time, the amount of restricted gifts — designated by donors for specific programs — rose by nearly $1 million, to just over $4.5 million. Combining the restrict-

CENTER FOR ISRAEL AND OVERSEAS