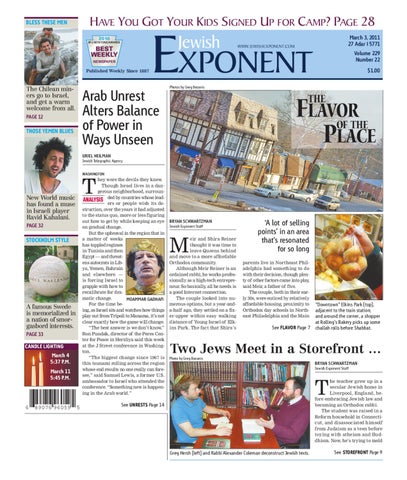 HAVE YOU GOT YOUR KIDS SIGNED UP FOR CAMP? PAGE 28 BEST WEEKLY NEWSPAPER

The Chilean miners go to Israel, and get a warm welcome from all. PAGE 12

FLAVOR OF THE PLACE

A famous Swede is memorialized in a nation of smorgasbord interests. PAGE 33 CANDLE LIGHTING

hey were the devils they knew. Though Israel lives in a dangerous neighborhood, surrounANALYSIS ded by countries whose leaders or people wish its destruction, over the years it had adjusted to the status quo, more or less figuring out how to get by while keeping an eye on gradual change. But the upheaval in the region that in a matter of weeks has toppled regimes in Tunisia and then Egypt — and threatens autocrats in Libya, Yemen, Bahrain and elsewhere — is forcing Israel to grapple with how to recalibrate for dramatic change. MOAMMAR GADHAFI For the time being, as Israel sits and watches how things play out from Tripoli to Manama, it’s not clear exactly how the game will change. “The best answer is we don’t know,” Ron Pundak, director of the Peres Center for Peace in Herzliya said this week at the J Street conference in Washington. “The biggest change since 1967 is this tsunami rolling across the region whose end results no one really can foresee,” said Samuel Lewis, a former U.S. ambassador to Israel who attended the conference. “Something new is happening in the Arab world.”

eir and Shira Reiner thought it was time to leave Queens behind and move to a more affordable Orthodox community. Although Meir Reiner is an ordained rabbi, he works professionally as a high-tech entrepreneur. So basically, all he needs is a good Internet connection. The couple looked into numerous options, but a year-anda-half ago, they settled on a fixer-upper within easy walking distance of Young Israel of Elkins Park. The fact that Shira’s

‘A lot of selling points’ in an area that’s resonated for so long parents live in Northeast Philadelphia had something to do with their decision, though plenty of other factors came into play, said Meir, a father of five. The couple, both in their early 30s, were enticed by relatively affordable housing, proximity to Orthodox day schools in Northeast Philadelphia and the Main

“Downtown” Elkins Park (top), adjacent to the train station; and around the corner, a shopper at Rolling’s Bakery picks up some challah rolls before Shabbat.

Two Jews Meet in a Storefront … Photo by Greg Bezanis

he teacher grew up in a secular Jewish home in Liverpool, England, before embracing Jewish law and becoming an Orthodox rabbi. The student was raised in a Reform household in Connecticut, and disassociated himself from Judaism as a teen before toying with atheism and Buddhism. Now, he’s trying to meld The Chilean min- ers go to Israel, and get a warm welcome from all. A famous Swede is memorialized in a nation of smor- gasbord interests. M...

The Chilean min- ers go to Israel, and get a warm welcome from all. A famous Swede is memorialized in a nation of smor- gasbord interests. M...