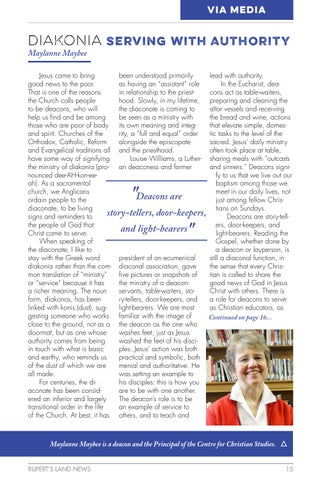 Jesus came to bring been understood primarily good news to the poor. as having an “assistant” role That is one of the reasons in relationship to the priestthe Church calls people hood. Slowly, in my lifetime, to be deacons, who will the diaconate is coming to help us find and be among be seen as a ministry with those who are poor of body its own meaning and integand spirit. Churches of the rity, a “full and equal” order Orthodox, Catholic, Reform alongside the episcopate and Evangelical traditions all and the priesthood. have some way of signifying Louise Williams, a Lutherthe ministry of diakonia (pro- an deaconess and former nounced dee-AH-kon-eeah). As a sacramental church, we Anglicans Deacons are ordain people to the diaconate, to be living story-tellers, door-keepers, signs and reminders to the people of God that and light-bearers Christ came to serve. When speaking of the diaconate, I like to stay with the Greek word president of an ecumenical diakonia rather than the com- diaconal association, gave mon translation of “ministry” five pictures or snapshots of or “service” because it has the ministry of a deacon: a richer meaning. The noun servants, table-waiters, stoform, diakonos, has been ry-tellers, door-keepers, and linked with konis (dust), suglight-bearers. We are most gesting someone who works familiar with the image of close to the ground, not as a the deacon as the one who doormat, but as one whose washes feet, just as Jesus authority comes from being washed the feet of his disciin touch with what is basic ples. Jesus’ action was both and earthy, who reminds us practical and symbolic, both of the dust of which we are menial and authoritative. He all made. was setting an example to For centuries, the dihis disciples: this is how you aconate has been considare to be with one another. ered an inferior and largely The deacon’s role is to be transitional order in the life an example of service to of the Church. At best, it has others, and to teach and

lead with authority. In the Eucharist, deacons act as table-waiters, preparing and cleaning the altar vessels and receiving the bread and wine, actions that elevate simple, domestic tasks to the level of the sacred. Jesus’ daily ministry often took place at table, sharing meals with “outcasts and sinners.” Deacons signify to us that we live out our baptism among those we meet in our daily lives, not just among fellow Christians on Sundays. Deacons are story-tellers, door-keepers, and light-bearers. Reading the Gospel, whether done by a deacon or layperson, is still a diaconal function, in the sense that every Christian is called to share the good news of God in Jesus Christ with others. There is a role for deacons to serve as Christian educators, as Continued on page 16...

Maylanne Maybee is a deacon and the Principal of the Centre for Christian Studies. RUPERT’S LAND NEWS 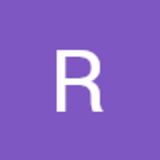