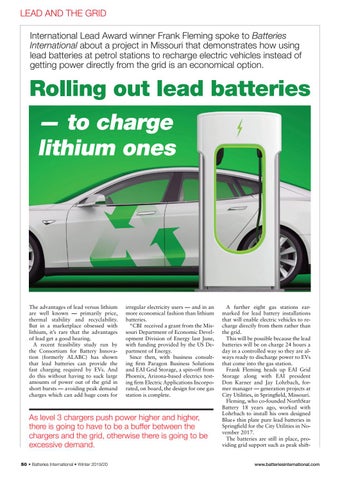 LEAD AND THE GRID International Lead Award winner Frank Fleming spoke to Batteries International about a project in Missouri that demonstrates how using lead batteries at petrol stations to recharge electric vehicles instead of getting power directly from the grid is an economical option.

— to charge lithium ones

The advantages of lead versus lithium are well known — primarily price, thermal stability and recyclability. But in a marketplace obsessed with lithium, it’s rare that the advantages of lead get a good hearing. A recent feasibility study run by the Consortium for Battery Innovation (formerly ALABC) has shown that lead batteries can provide the fast charging required by EVs. And do this without having to suck large amounts of power out of the grid in short bursts — avoiding peak demand charges which can add huge costs for

irregular electricity users — and in an more economical fashion than lithium batteries. “CBI received a grant from the Missouri Department of Economic Development Division of Energy last June, with funding provided by the US Department of Energy. Since then, with business consulting firm Paragon Business Solutions and EAI Grid Storage, a spin-off from Phoenix, Arizona-based electrics testing firm Electric Applications Incorporated, on board, the design for one gas station is complete.

A further eight gas stations earmarked for lead battery installations that will enable electric vehicles to recharge directly from them rather than the grid. This will be possible because the lead batteries will be on charge 24 hours a day in a controlled way so they are always ready to discharge power to EVs that come into the gas station. Frank Fleming heads up EAI Grid Storage along with EAI president Don Karner and Jay Lohrbach, former manager — generation projects at City Utilities, in Springfield, Missouri. Fleming, who co-founded NorthStar Battery 18 years ago, worked with Lohrbach to install his own designed Blue+ thin plate pure lead batteries in Springfield for the City Utilities in November 2017. The batteries are still in place, providing grid support such as peak shift-

We hope you enjoy your latest edition of Batteries International. In this issue we look at the year ahead and asked senior industry figures for their take on the future. As ever there was a wide range of opinions but the underpinning theme is unremittingly positive: for lead and for lithium. This is not the case of talking a market up — these are professionals talking to fellow professionals. It’s good news indeed. We also interview Dong Li, the charismatic founder of Leoch, and the man who turned a small start-up into one of China’s largest battery firms with a billion-dollar plus annual revenue. Other features look at the flow battery industry which, if it can ever be properly commercialized, could give other long-duration energy storage options a run for their money. Elsewhere we look at an exciting lead battery to grid development in Missouri, the forgotten battery hero Nicholas Callan, and our regular in-depth news and analysis. 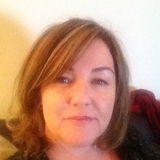