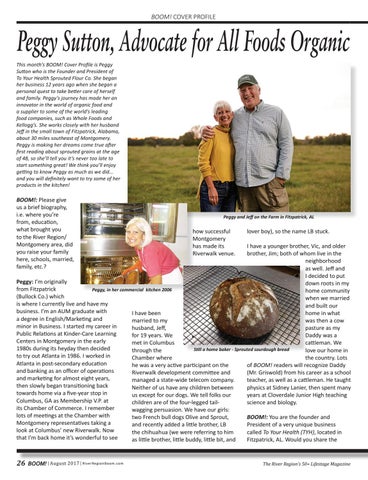 Peggy Sutton, Advocate for All Foods Organic This month’s BOOM! Cover Profile is Peggy Sutton who is the Founder and President of To Your Health Sprouted Flour Co. She began her business 12 years ago when she began a personal quest to take better care of herself and family. Peggy’s journey has made her an innovator in the world of organic food and a supplier to some of the world’s leading food companies, such as Whole Foods and Kellogg’s. She works closely with her husband Jeff in the small town of Fitzpatrick, Alabama, about 30 miles southeast of Montgomery. Peggy is making her dreams come true after first reading about sprouted grains at the age of 48, so she’ll tell you it’s never too late to start something great! We think you’ll enjoy getting to know Peggy as much as we did... and you will definitely want to try some of her products in the kitchen!

BOOM!: Please give us a brief biography, i.e. where you’re from, education, what brought you to the River Region/ Montgomery area, did you raise your family here, schools, married, family, etc.?

Peggy and Jeff on the Farm in Fitzpatrick, AL

how successful Montgomery has made its Riverwalk venue.

I have a younger brother, Vic, and older brother, Jim; both of whom live in the neighborhood as well. Jeff and I decided to put Peggy: I’m originally down roots in my from Fitzpatrick Peggy, in her commercial kitchen 2006 home community (Bullock Co.) which when we married is where I currently live and have my and built our business. I’m an AUM graduate with I have been home in what a degree in English/Marketing and married to my was then a cow minor in Business. I started my career in husband, Jeff, pasture as my Public Relations at Kinder-Care Learning for 19 years. We Daddy was a Centers in Montgomery in the early met in Columbus cattleman. We 1980s during its heyday then decided Still a home baker - Sprouted sourdough bread through the love our home in to try out Atlanta in 1986. I worked in Chamber where the country. Lots Atlanta in post-secondary education he was a very active participant on the of BOOM! readers will recognize Daddy and banking as an officer of operations Riverwalk development committee and (Mr. Griswold) from his career as a school and marketing for almost eight years, managed a state-wide telecom company. teacher, as well as a cattleman. He taught then slowly began transitioning back Neither of us have any children between physics at Sidney Lanier, then spent many towards home via a five-year stop in us except for our dogs. We tell folks our years at Cloverdale Junior High teaching Columbus, GA as Membership V.P. at children are of the four-legged tailscience and biology. its Chamber of Commerce. I remember wagging persuasion. We have our girls: lots of meetings at the Chamber with two French bull dogs Olive and Sprout, BOOM!: You are the founder and Montgomery representatives taking a President of a very unique business and recently added a little brother, LB look at Columbus’ new Riverwalk. Now called To Your Health (TYH), located in the chihuahua (we were referring to him that I’m back home it’s wonderful to see Fitzpatrick, AL. Would you share the as little brother, little buddy, little bit, and 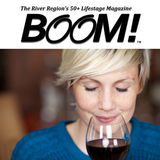