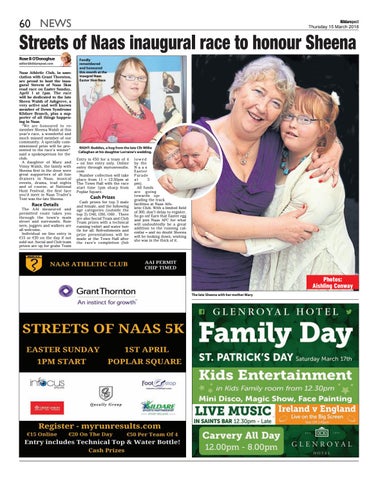 Naas Athletic Club, in association with Grant Thornton, are proud to host the inaugural Streets of Naas 5km road race on Easter Sunday, April 1 at 1pm. The race will be dedicated to the late Sheen Walsh of Ashgrove, a very active and well known member of Down Syndrome Kildare Branch, plus a supporter of all things happening in Naas. “We are honoured to remember Sheena Walsh at this year’s race, a wonderful and much missed member of our community. A specially commissioned prize will be presented to the race’s winner” said a spokesperson for the club. A daughter of Mary and Vinny Walsh, the family with Sheena first in the door were great supporters of all fundraisers in Naas, musical events, drama, trad nights and of course, at National Hunt Festival, the first face you’d meet in Naas Trader’s Tent was the late Sheena.

The AAI measured and permitted route takes you through the town’s main street and surrounds. Runners, joggers and walkers are all welcome. Individual on line entry is €15 or €20 on the day if not sold out. Social and Club team prizes are up for grabs Team

RIGHT: Buddies, a hug from the late Cllr Willie Callaghan at his daughter Lorraine&#39;s wedding.

Entry is €50 for a team of 4 – on line entry only. Online entry through myrunresults. com Number collection will take place from 11 – 12:30pm at The Town Hall with the race start time 1pm sharp from Poplar Square.

Cash prizes for top 3 male and female, and the following age categories (outside the top 3) O40, O50, O60 . There are also Social Team and Club Team prizes with a technical running t-shirt and water bottle for all. Refreshments and prize presentations will be made at the Town Hall after the race’s completion (fol-

lowed by the Naas Easter Parade at 3 pm). All funds are going towards upgrading the track facilities at Naas Athletic Club. With a limited field of 300, don’t delay to register. So go on! Earn that Easter egg and join Naas AFC for what will undoubtedly be a great addition to the running calendar – and no doubt Sheena will be looking down, wishing she was in the thick of it.

Photos: Aishling Conway The late Sheena with her mother Mary