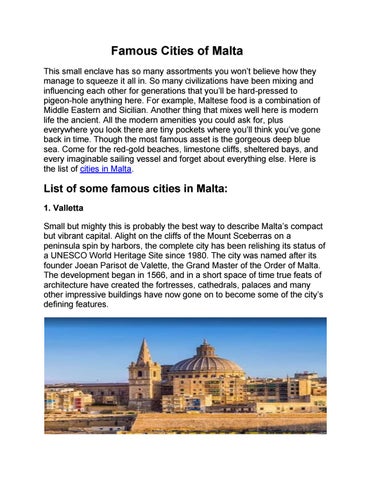 Famous Cities of Malta This small enclave has so many assortments you won’t believe how they manage to squeeze it all in. So many civilizations have been mixing and influencing each other for generations that you’ll be hard-pressed to pigeon-hole anything here. For example, Maltese food is a combination of Middle Eastern and Sicilian. Another thing that mixes well here is modern life the ancient. All the modern amenities you could ask for, plus everywhere you look there are tiny pockets where you’ll think you’ve gone back in time. Though the most famous asset is the gorgeous deep blue sea. Come for the red-gold beaches, limestone cliffs, sheltered bays, and every imaginable sailing vessel and forget about everything else. Here is the list of cities in Malta.

List of some famous cities in Malta: 1. Valletta Small but mighty this is probably the best way to describe Malta’s compact but vibrant capital. Alight on the cliffs of the Mount Sceberras on a peninsula spin by harbors, the complete city has been relishing its status of a UNESCO World Heritage Site since 1980. The city was named after its founder Joean Parisot de Valette, the Grand Master of the Order of Malta. The development began in 1566, and in a short space of time true feats of architecture have created the fortresses, cathedrals, palaces and many other impressive buildings have now gone on to become some of the city’s defining features.

2. Mdina The former capital of Malta is home to all sorts of fascinating history and culture, in fact, the city’s history goes back almost 4,000 years! It’s often considered to be one of Europe’s prettiest walled cities, so don’t miss out if you’re coming to Malta on holiday. Busses go from Valletta to Mdina, which will drop you off at the city walls. Inside the city center, no cars are allowed at all, so enjoy the peaceful atmosphere and allow yourselves to take a little step back in time.

3. Sliema Sliema is a coastal town situated in the northeast of Malta, adjacent to St. Julians. Once the home of Malta's aristocracy; it has now become a major commercial area, very popular for shopping, bars, cafes, restaurants, and hotels. Sliema acquired its name from a chapel dedicated to The Our Lady

of The Sea built-in 1855, which served as a reference point to the fishermen who inhabited the area.

4. Mellieha Mellieħa is a village located in the Northwest part of Malta. Mellieħa took its name from the ancient Punic and Roman salt-terms, as Mellieha means salt in Arabic. Mellieha is one of Malta’s most attractive tourist and summer resorts with beautiful sandy beaches and blue sea. Mellieha has Malta’s largest sandy beach, Għadira, which is perfect for families with small children, as the water remains shallow for a considerable distance from the

5. Qawra Qawra is the site of one of the many towers built by the Knights in 1637. Standing on Qawra's point, this small watchtower watches St. Paulâ&#x20AC;&#x2122;s Bay to

the West and Salina Bay to the east. The tower is now used as a restaurant, however, additions to the building took away its authenticity. 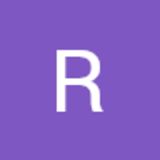 This small enclave has so many assortments you won’t believe how they manage to squeeze it all in. So many civilizations have been mixing an...

This small enclave has so many assortments you won’t believe how they manage to squeeze it all in. So many civilizations have been mixing an...