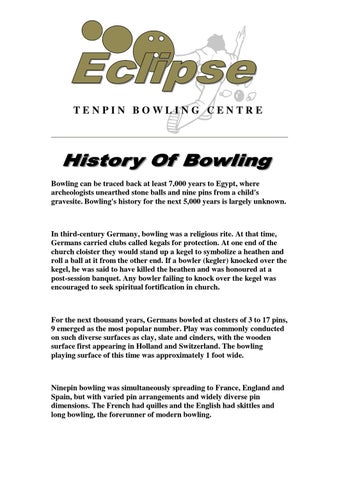 Bowling can be traced back at least 7,000 years to Egypt, where archeologists unearthed stone balls and nine pins from a child's gravesite. Bowling's history for the next 5,000 years is largely unknown.

In third-century Germany, bowling was a religious rite. At that time, Germans carried clubs called kegals for protection. At one end of the church cloister they would stand up a kegel to symbolize a heathen and roll a ball at it from the other end. If a bowler (kegler) knocked over the kegel, he was said to have killed the heathen and was honoured at a post-session banquet. Any bowler failing to knock over the kegel was encouraged to seek spiritual fortification in church.

For the next thousand years, Germans bowled at clusters of 3 to 17 pins, 9 emerged as the most popular number. Play was commonly conducted on such diverse surfaces as clay, slate and cinders, with the wooden surface first appearing in Holland and Switzerland. The bowling playing surface of this time was approximately 1 foot wide.

Ninepin bowling was simultaneously spreading to France, England and Spain, but with varied pin arrangements and widely diverse pin dimensions. The French had quilles and the English had skittles and long bowling, the forerunner of modern bowling.

Henry VIII Striking out? In England bowling assumed the character of a commoners sport with the first establishment opening in London in the fifteenth century. The word alley became associated with pin bowling establishments and bowling became more closely identified with tavern life. It was with this image that bowling went to America with the Dutch colonists. The evolution can be divided into four general time periods based upon the organization of participation, the establishment of standards for play and on the localization of control into various guiding bodies. The development period (1837-1875) featured bowling's growth as a regular outdoor family activity for German immigrant social groups. Eventually participation moved indoors to ethnic cultural centres in which persons of similar background could enjoy food, drink and recreational activities together. In 1840 Americas' first commercial indoor establishment, The Knickerbocker Alleys opened in Manhattan, featuring ninepin bowling. This venture enjoyed continued success primarily because it served the desires of New York's large German population. Soon the outward enthusiasm of these people for bowling attracted other Americans to the sport.

Bowling continued to draw gamblers and hustlers and genuine bowling enthusiasts waged continuous battles against local authorities who tried to ban bowling activity as a way to eliminate gambling, the idle use of time and drinking. It is believed that the addition of a tenth pin to the pin arrangement was a tactic to get round an 1837 ban of public ninepin bowling by the government of Connecticut.

As public bans on leisure activities became more frequent, bowling groups answered the challenge by forming clubs. Such clubs were legally protected as long as they were appropriately licensed and originated for the common good of the members. During the club era (1875-1895) the exclusive but permissive club environment provided a way for serious enthusiasts to shape the development of bowling in America. Bowlings existence was assured within the confines of the club, but the chaotic state of playing rules and standards left the future of large-scale competitive bowling uncertain. Bowling took many forms bowlers in the east used different rules to bowlers in the west, some had nine pins while others had ten.

During these years a maximum score was usually 200, with three balls per frame (each attempt to knock down a full setup of pins) and ten frames making up one game. In some areas bowlers started with 200 points and points were deducted with each roll of the ball, the object being to reach zero first. The weight and size of pins and balls varied greatly and there were no standard lane specifications. It needed a governing body to bring all this into line. The first such group appeared in 1875 and was called the National Bowling Association (NBA) the NBA formulated rules with respect to the ball size, playing procedures and lane specifications. In 1890 a successor came along called the American Bowling League (ABL) standardizing the pin size and eliminating the third ball while still leaving the maximum score at 200.

The competitive era (1895-1961) featured a growth in competitive bowling. It began with the forming in 1895 of the American Bowling Congress (ABC). It was this body that agreed upon the present method of scoring with 300 as the maximum score, pin placement of 12 inches centre to centre was agreed and a programme of lane inspection to ensure consistency of lane specifications was adhered to. They also started yearly tournaments to promote the sport and allow bowlers from all parts of the nation to compete under standardized conditions.

The commercial era (1961- present) bowling although still a very competitive sport, is now becoming a family pursuit and centres becoming more recreationally orientated, catering for people who come for entertainment not for competition. The bowling industry however are always developing new balls and accessories targeted at the serious bowler.