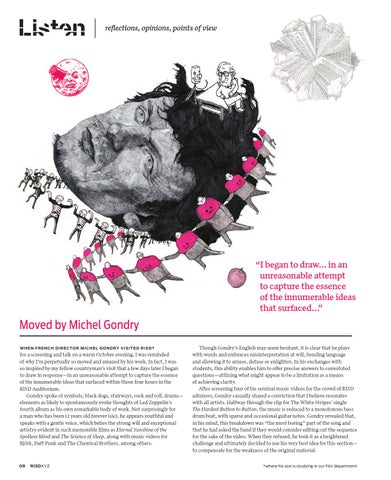 for a screening and talk on a warm October evening, I was reminded of why I’m perpetually so moved and amazed by his work. In fact, I was so inspired by my fellow countryman’s visit that a few days later I began to draw in response—in an unreasonable attempt to capture the essence of the innumerable ideas that surfaced within those four hours in the RISD Auditorium. Gondry spoke of symbols, black dogs, stairways, rock and roll, drums— elements as likely to spontaneously evoke thoughts of Led Zeppelin’s fourth album as his own remarkable body of work. Not surprisingly for a man who has been 12 years old forever (sic), he appears youthful and speaks with a gentle voice, which belies the strong will and exceptional artistry evident in such memorable films as Eternal Sunshine of the Spotless Mind and The Science of Sleep, along with music videos for Björk, Daft Punk and The Chemical Brothers, among others.

Though Gondry’s English may seem hesitant, it is clear that he plays with words and embraces misinterpretation at will, bending language and allowing it to amuse, defuse or enlighten. In his exchanges with students, this ability enables him to offer precise answers to convoluted questions—utilizing what might appear to be a limitation as a means of achieving clarity. After screening four of his seminal music videos for the crowd of RISD admirers, Gondry casually shared a conviction that I believe resonates with all artists. Halfway through the clip for The White Stripes’ single The Hardest Button to Button, the music is reduced to a monotonous bass drum beat, with sparse and occasional guitar notes. Gondry revealed that, in his mind, this breakdown was “the most boring” part of the song and that he had asked the band if they would consider editing out the sequence for the sake of the video. When they refused, he took it as a heightened challenge and ultimately decided to use his very best idea for this section— to compensate for the weakness of the original material. *where his son is studying in our FAV department