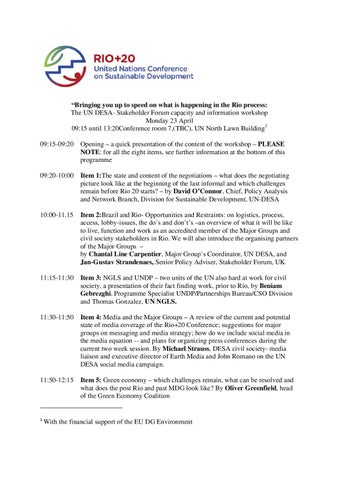 “Bringing you up to speed on what is happening in the Rio process: The UN DESA- Stakeholder Forum capacity and information workshop Monday 23 April 09:15 until 13:20Conference room 7,(TBC), UN North Lawn Building1 09:15-09:20 Opening – a quick presentation of the content of the workshop – PLEASE NOTE: for all the eight items, see further information at the bottom of this programme 09:20-10:00 Item 1:The state and content of the negotiations – what does the negotiating picture look like at the beginning of the last informal and which challenges remain before Rio 20 starts? – by David O’Connor, Chief, Policy Analysis and Network Branch, Division for Sustainable Development, UN-DESA 10:00-11.15

Item 2:Brazil and Rio- Opportunities and Restraints: on logistics, process, access, lobby-issues, the do’s and don’t’s –an overview of what it will be like to live, function and work as an accredited member of the Major Groups and civil society stakeholders in Rio. We will also introduce the organising partners of the Major Groups – by Chantal Line Carpentier, Major Group’s Coordinator, UN DESA, and Jan-Gustav Strandenaes, Senior Policy Adviser, Stakeholder Forum, UK

11:15-11:30 Item 3: NGLS and UNDP – two units of the UN also hard at work for civil society, a presentation of their fact finding work, prior to Rio, by Beniam Gebrezghi, Programme Specialist UNDP/Partnerships Bureau/CSO Division and Thomas Gonzalez, UN NGLS. 11:30-11:50 Item 4: Media and the Major Groups – A review of the current and potential state of media coverage of the Rio+20 Conference; suggestions for major groups on messaging and media strategy; how do we include social media in the media equation -- and plans for organizing press conferences during the current two week session. By Michael Strauss, DESA civil society- media liaison and executive director of Earth Media and John Romano on the UN DESA social media campaign. 11:50-12:15 Item 5: Green economy – which challenges remain, what can be resolved and what does the post Rio and past MDG look like? By Oliver Greenfield, head of the Green Economy Coalition                                                             1

With the financial support of the EU DG Environment

12:15-12:35 Item 6: Private Sector and Rio plus 20 – a report back from the Hague 11 and 12 April consultation meeting called “Realising Inclusive and Green growth: UN Rio+20 Business & Industry Consultation with Government and Civil Society” where more than 300 high level representatives attended – by a representative from the business and industry major group (speaker to be announced) 12:35-12:55 Item 7: Science and Rio plus 20 – a report back from the conference: “Planet under pressure – New knowledge towards solutions”. Highlights from the global science seminar preparing for Rio that recently took place in London, where more than 3000 scientists participated and discussed among others what are the limits to our endeavours? What messages have these scientists given us and the Rio process?– by Gisbert Glaser, representing ICSU and the Scientific and Technological major group. 12:55-13:20 Item 8: International Framework on Sustainable Development – where are we in terms of strengthening the governance area in the Rio 20 outcome? By Jan-Gustav Strandenaes, Senior Policy Adviser, Stakeholder Forum 13:20

On the programme: This workshop consists of eight items, all integrated in such a way that the participant will be given an understanding of where the Rio-process is at this moment, in terms of the text as well as in terms of access and process. The eight items are built around three general areas – • Process, logistics and rules of engagement • The Green economy in the context of poverty eradication and sustainable development • The International Framework on Sustainable Development The presenters are all seasoned Rio 20 people having been with the thoughts, ideas and issues on Rio plus 20 and how they have evolved from their inception back in 2008/2009 through the UN General Assembly Decision calling for the Rio plus 20 Conference on December 24, 2009 and up until the present. The workshop will be facilitated and chaired by Chantal Line Carpentier of UN DESA and Jan-Gustav Strandenaes of Stakeholder Forum. Item 1: The Bureau for the Rio 20 process was given a challenging and difficult task by the delegates after the last prep.com in March this year – make an effort to consolidate the negotiating text. The text had swelled from a modest beginning of some 20 pages to what was deemed an unruly 200 pages. The Bureau turned to its secretariat at UNDESA and asked them to help develop a ‘streamlined text’. Item 1 will give civil society an overview of the ‘new text’ and analyse some of the challenges and outline some of the difficulties we all face before we reach the end of the conference in June and we have an agreed document. Item 2: Key to a successful experience with the Rio conference in June is access, and key to access is knowledge of and understanding of logistics, process and rules of engagements. This item will give the participant an update of the latest development with what is happening at

UN level and in Brazil, outline the structure of civil society/major groups in the Rio process and introduce the Organising Partners for the nine major groups. Item 3: UN NGLS and UNDP, its division for civil society are two of the many UN elements in addition to UN DESA working to help civil society get access in Brazil. The two units have just concluded a fact finding mission in Brazil and will give a first report back their trip. Item 4: Item 3: Most members of the major group community can write very competently about the issues they deal with. Some civil society organisations are large enough to have their own media staff to continually engage with the many levels of media available today – international news agencies, major television and radio networks, national newspapers, serious and celebrity journalists, newsletters, social media, tweets and blogs. The UN is a world unto itself with the same journalists daily covering a multitude of issues from poverty and famine, through financial collapse to Security Council politics. Gaining the attention of the UN press and mastering the art of communicating complex ideas on sustainable development and governance therefore become a challenge that sets itself apart from ‘normal’ media communication. Having an open access to the UN press room for non-governmental organisations is not a given as special rules of engagement also must be heeded. UN DESA has therefore brought in a media consultant who has worked with both civil society and UN journalists since 1992, and has been involved with summits and sustainable development from the Earth Summit, through the WSSD in Johannesburg in 2002, to COP 15 of the UNFCCC in Copenhagen. A short intro here will be followed with more information throughout the two weeks informal. Item 5: Green economy in the context of sustainable development and poverty eradication is one of the two main objectives of the Rio 20 Conference. What was conceived in 2008/2009 as a new challenge to the dominant global economic paradigm, has turned out to be more difficult and intricate to understand and incorporate into the negotiations than many anticipated. The Green Economy Coalition was established a few years back and given a mandate to follow, stimulate and lobby for the concept. The coalition has followed the agenda issue, and has several times said this issue has a life well beyond the outcome of Rio. This is their update on the issue as it stands at the moment. Item 6: Business Action for Sustainable Development (BASD 2012) with the Government of the Netherlands and the United Nations Department of Economic and Social Affairs (UNDESA) organized a conference on “Realising Inclusive and Green growth: UN Rio+20 Business & Industry Consultation with Government and Civil Society” on the 11th and 12th of April in the Hague, the Netherlands. The conference was labelled a High Level Consultation and senior business executives and ministers or the equivalent civil servant level participated. The aim of the meeting was to: (1) to stimulate action and increase awareness in international public-private collaboration in realising inclusive green growth, and (2) develop constructive global private sector key messages from business to the Rio+20 Conference. The participants at the training session will be given an overview of the main points from the conference and how business will continue to engage and contribute to the outcome of Rio plus 20. Item 7: More than 3000 scientists participated in the science-conference called “Planet Under Pressure: New knowledge towards solutions” which was held in London from March 26 to March 29. This major international interdisciplinary science and policy conference viewed the state of the planet with the most up-to date scientific analysis, focussing on what a planet

based on sustainable development would look like. Global environmental change science was discussed with a wide range of other stakeholders who were involved in science and in delivering enhanced stewardship. The stakeholders were senior policy-makers, industry leaders, NGOs, development agencies and the media. Together the conference participants explored options, obstacles and opportunities for sustainable development, drawing on the particular input that the scientific community provided. A series of policy briefs were prepared prior to the conference, and will subsequently be fed into the Rio+20 preparatory process. The final outcome of the conference will be presented at Rio+20 but we get a first overview from the conference on Monday April 23. Item 8: The second of the two agenda objects for the Rio 20 Conference is the so-called IFSD â&#x20AC;&#x201C; the International Framework on Sustainable Development. This agenda point has developed into several different initiatives â&#x20AC;&#x201C; the establishment of a Sustainable Development Council, the upgrade of UNEP, a global convention on the Rio 10 principle, a convention of CSR, strengthening of the national Councils for Sustainable Development -- are some of these issues. IFSD seems to share the same fate as the one given the Green Economy issue â&#x20AC;&#x201C; it seemed simple enough at the outset, but as the negotiations have evolved over time, the issue has become subject to many different interpretations and various proposal have been made that might take IFSD in different directions, - some viewed as more contentious than others. Item 8 will try to map out where the IFSD element is at the moment.