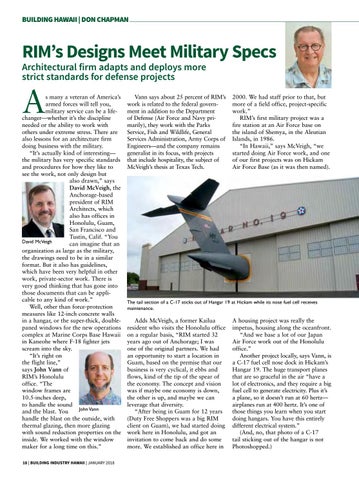 s many a veteran of America’s armed forces will tell you, military service can be a lifechanger—whether it’s the discipline needed or the ability to work with others under extreme stress. There are also lessons for an architecture firm doing business with the military. “It’s actually kind of interesting— the military has very specific standards and procedures for how they like to see the work, not only design but also drawn,” says David McVeigh, the Anchorage-based president of RIM Architects, which also has offices in Honolulu, Guam, San Francisco and Tustin, Calif. “You David McVeigh can imagine that an organization as large as the military, the drawings need to be in a similar format. But it also has guidelines, which have been very helpful in other work, private-sector work. There is very good thinking that has gone into those documents that can be applicable to any kind of work.” Well, other than force-protection measures like 12-inch concrete walls in a hangar, or the super-thick, doublepaned windows for the new operations complex at Marine Corps Base Hawaii in Kaneohe where F-18 fighter jets scream into the sky. “It’s right on the flight line,” says John Vann of RIM’s Honolulu office. “The window frames are 10.5-inches deep, to handle the sound John Vann and the blast. You handle the blast on the outside, with thermal glazing, then more glazing with sound reduction properties on the inside. We worked with the window maker for a long time on this.” 18 | BUILDING INDUSTRY HAWAII | JANUARY 2018

Vann says about 25 percent of RIM’s work is related to the federal government in addition to the Department of Defense (Air Force and Navy primarily), they work with the Parks Service, Fish and Wildlife, General Services Administration, Army Corps of Engineers—and the company remains generalist in its focus, with projects that include hospitality, the subject of McVeigh’s thesis at Texas Tech.

2000. We had staff prior to that, but more of a field office, project-specific work.” RIM’s first military project was a fire station at an Air Force base on the island of Shemya, in the Aleutian Islands, in 1986. “In Hawaii,” says McVeigh, “we started doing Air Force work, and one of our first projects was on Hickam Air Force Base (as it was then named).

The tail section of a C-17 sticks out of Hangar 19 at Hickam while its nose fuel cell receives maintenance.

Adds McVeigh, a former Kailua resident who visits the Honolulu office on a regular basis, “RIM started 32 years ago out of Anchorage; I was one of the original partners. We had an opportunity to start a location in Guam, based on the premise that our business is very cyclical, it ebbs and flows, kind of the tip of the spear of the economy. The concept and vision was if maybe one economy is down, the other is up, and maybe we can leverage that diversity. “After being in Guam for 12 years (Duty Free Shoppers was a big RIM client on Guam), we had started doing work here in Honolulu, and got an invitation to come back and do some more. We established an office here in

A housing project was really the impetus, housing along the oceanfront. “And we base a lot of our Japan Air Force work out of the Honolulu office.” Another project locally, says Vann, is a C-17 fuel cell nose dock in Hickam’s Hangar 19. The huge transport planes that are so graceful in the air “have a lot of electronics, and they require a big fuel cell to generate electricity. Plus it’s a plane, so it doesn’t run at 60 hertz— airplanes run at 400 hertz. It’s one of those things you learn when you start doing hangars. You have this entirely different electrical system.” (And, no, that photo of a C-17 tail sticking out of the hangar is not Photoshopped.)

RIM Projects in Hawaii These are few of RIM Architects’

Vann and McVeigh say that while they are proud to be involved in providing actual “defense” structures in support of America’s men and women in uniform, in many ways their most rewarding work is focused on military families.

if they live on base, and if they say yes, she’ll ask about the kitchen, did it have pot drawers? And patients will look at her funny, like, well, yes, the kitchen did have pot drawers, why? And my wife tells them, ‘That’s because my husband designed your kitchen, and I told him to put in pot drawers!’ “The rewarding part is that service members are stationed over there, and for many it’s their first time out of the country, out of their home state, out of their home county, and now they’re off to Okinawa or somewhere. And the kind of home that we can help the Air Force provide them gives them a sense of home, even though they’re thousands of miles away from home.” He says they try to also include “sense of place” touches that reflect where they are in the world, but RIM’s work remains Western architecture. Vann cites one humorous example of working with local designers. “In Japan, light switches are never in the bathroom, they’re outside, that’s just the way they do it. If you have children, you can imagine the possible shenanigans—this is married family housing—so we put the light switches back inside.” RIM anticipates a busy new year, including several military projects in Japan that are awaiting final approval of funding, as well as a major resort project in Hawaii. “We really can’t talk about that yet,” says McVeigh. The military is not the only place “Top Secret” matters. Know a good person doing good things in Hawaii’s building industry? Please e-mail don@tradepublishing.com.

We Can Help. Call Us for Details. Garret J. Sullivan President 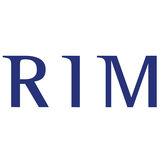