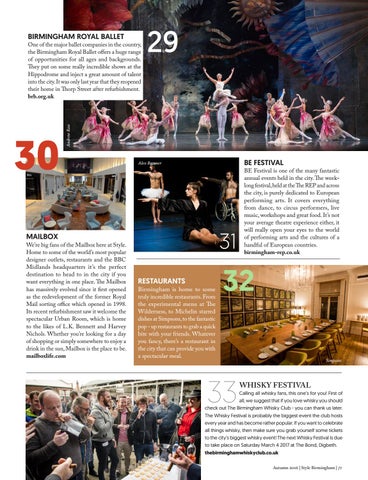 One of the major ballet companies in the country, the Birmingham Royal Ballet offers a huge range of opportunities for all ages and backgrounds. They put on some really incredible shows at the Hippodrome and inject a great amount of talent into the city. It was only last year that they reopened their home in Thorp Street after refurbishment. brb.org.uk

We’re big fans of the Mailbox here at Style. Home to some of the world’s most popular designer outlets, restaurants and the BBC Midlands headquarters it’s the perfect destination to head to in the city if you want everything in one place. The Mailbox has massively evolved since it first opened as the redevelopment of the former Royal Mail sorting office which opened in 1998. Its recent refurbishment saw it welcome the spectacular Urban Room, which is home to the likes of L.K. Bennett and Harvey Nichols. Whether you’re looking for a day of shopping or simply somewhere to enjoy a drink in the sun, Mailbox is the place to be. mailboxlife.com

Birmingham is home to some truly incredible restaurants. From the experimental menu at The Wilderness, to Michelin starred dishes at Simpsons, to the fantastic pop - up restaurants to grab a quick bite with your friends. Whatever you fancy, there’s a restaurant in the city that can provide you with a spectacular meal.

BE Festival is one of the many fantastic annual events held in the city. The weeklong festival, held at the The REP and across the city, is purely dedicated to European performing arts. It covers everything from dance, to circus performers, live music, workshops and great food. It’s not your average theatre experience either, it will really open your eyes to the world of performing arts and the cultures of a handful of European countries. birmingham-rep.co.uk

Calling all whisky fans, this one’s for you! First of all, we suggest that if you love whisky you should check out The Birmingham Whisky Club - you can thank us later. The Whisky Festival is probably the biggest event the club hosts every year and has become rather popular. If you want to celebrate all things whisky, then make sure you grab yourself some tickets to the city’s biggest whisky event! The next Whisky Festival is due to take place on Saturday March 4 2017 at The Bond, Digbeth. thebirminghamwhiskyclub.co.uk Autumn 2016 | Style Birmingham | 71 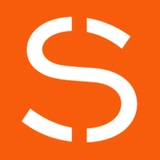