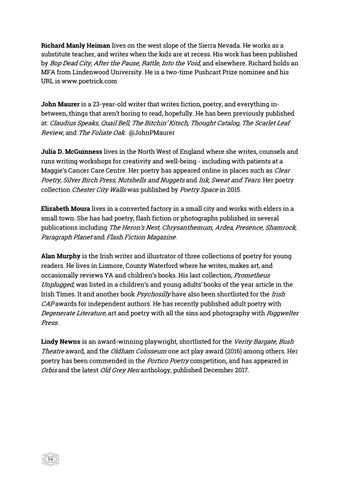 Richard Manly Heiman lives on the west slope of the Sierra Nevada. He works as a substitute teacher, and writes when the kids are at recess. His work has been published by Bop Dead City, After the Pause, Rattle, Into the Void, and elsewhere. Richard holds an MFA from Lindenwood University. He is a two-time Pushcart Prize nominee and his URL is www.poetrick.com John Maurer is a 23-year-old writer that writes fiction, poetry, and everything inbetween, things that aren’t boring to read, hopefully. He has been previously published at: Claudius Speaks, Quail Bell, The Bitchin’ Kitsch, Thought Catalog, The Scarlet Leaf

Review, and The Foliate Oak. @JohnPMaurer Julia D. McGuinness lives in the North West of England where she writes, counsels and runs writing workshops for creativity and well-being - including with patients at a Maggie’s Cancer Care Centre. Her poetry has appeared online in places such as Clear

Poetry, Silver Birch Press, Nutshells and Nuggets and Ink, Sweat and Tears. Her poetry collection Chester City Walls was published by Poetry Space in 2015. Elizabeth Moura lives in a converted factory in a small city and works with elders in a small town. She has had poetry, flash fiction or photographs published in several publications including The Heron’s Nest, Chrysanthemum, Ardea, Presence, Shamrock,

Paragraph Planet and Flash Fiction Magazine. Alan Murphy is the Irish writer and illustrator of three collections of poetry for young readers. He lives in Lismore, County Waterford where he writes, makes art, and occasionally reviews YA and children’s books. His last collection, Prometheus

Unplugged, was listed in a children’s and young adults’ books of the year article in the Irish Times. It and another book Psychosilly have also been shortlisted for the Irish CAP awards for independent authors. He has recently published adult poetry with Degenerate Literature, art and poetry with all the sins and photography with Riggwelter Press. Lindy Newns is an award-winning playwright, shortlisted for the Verity Bargate, Bush

Theatre award, and the Oldham Colisseum one act play award (2016) among others. Her poetry has been commended in the Portico Poetry competition, and has appeared in Orbis and the latest Old Grey Hen anthology, published December 2017. 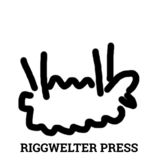