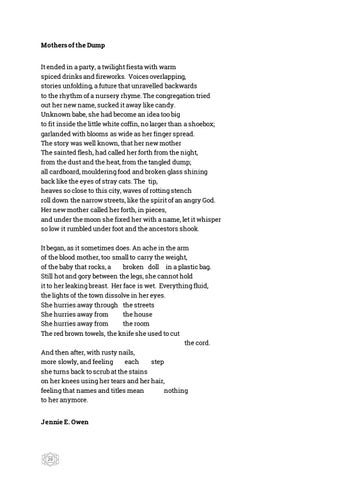 Mothers of the Dump It ended in a party, a twilight fiesta with warm spiced drinks and fireworks. Voices overlapping, stories unfolding, a future that unravelled backwards to the rhythm of a nursery rhyme. The congregation tried out her new name, sucked it away like candy. Unknown babe, she had become an idea too big to fit inside the little white coffin, no larger than a shoebox; garlanded with blooms as wide as her finger spread. The story was well known, that her new mother The sainted flesh, had called her forth from the night, from the dust and the heat, from the tangled dump; all cardboard, mouldering food and broken glass shining back like the eyes of stray cats. The tip, heaves so close to this city, waves of rotting stench roll down the narrow streets, like the spirit of an angry God. Her new mother called her forth, in pieces, and under the moon she fixed her with a name, let it whisper so low it rumbled under foot and the ancestors shook. It began, as it sometimes does. An ache in the arm of the blood mother, too small to carry the weight, of the baby that rocks, a broken doll in a plastic bag. Still hot and gory between the legs, she cannot hold it to her leaking breast. Her face is wet. Everything fluid, the lights of the town dissolve in her eyes. She hurries away through the streets She hurries away from the house She hurries away from the room The red brown towels, the knife she used to cut the cord. And then after, with rusty nails, more slowly, and feeling each

she turns back to scrub at the stains on her knees using her tears and her hair, feeling that names and titles mean nothing to her anymore. Jennie E. Owen