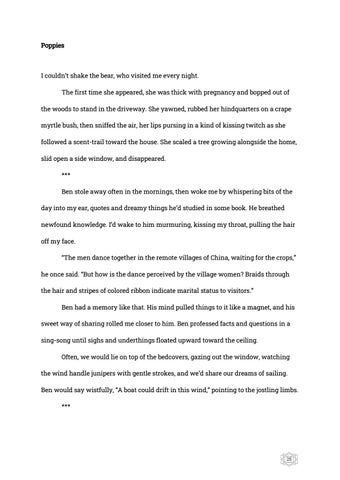 I couldn’t shake the bear, who visited me every night. The first time she appeared, she was thick with pregnancy and bopped out of the woods to stand in the driveway. She yawned, rubbed her hindquarters on a crape myrtle bush, then sniffed the air, her lips pursing in a kind of kissing twitch as she followed a scent-trail toward the house. She scaled a tree growing alongside the home, slid open a side window, and disappeared. *** Ben stole away often in the mornings, then woke me by whispering bits of the day into my ear, quotes and dreamy things he’d studied in some book. He breathed newfound knowledge. I’d wake to him murmuring, kissing my throat, pulling the hair off my face. “The men dance together in the remote villages of China, waiting for the crops,” he once said. “But how is the dance perceived by the village women? Braids through the hair and stripes of colored ribbon indicate marital status to visitors.” Ben had a memory like that. His mind pulled things to it like a magnet, and his sweet way of sharing rolled me closer to him. Ben professed facts and questions in a sing-song until sighs and underthings floated upward toward the ceiling. Often, we would lie on top of the bedcovers, gazing out the window, watching the wind handle junipers with gentle strokes, and we’d share our dreams of sailing. Ben would say wistfully, “A boat could drift in this wind,” pointing to the jostling limbs. ***