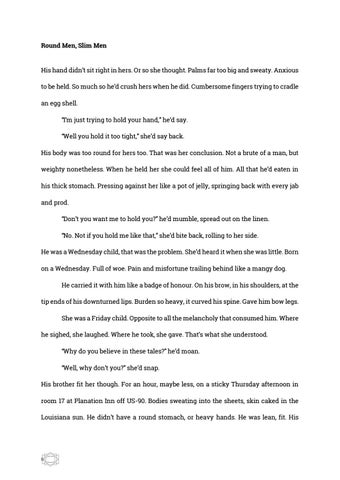 His hand didn’t sit right in hers. Or so she thought. Palms far too big and sweaty. Anxious to be held. So much so he’d crush hers when he did. Cumbersome fingers trying to cradle an egg shell. “I’m just trying to hold your hand,” he’d say. “Well you hold it too tight,” she’d say back. His body was too round for hers too. That was her conclusion. Not a brute of a man, but weighty nonetheless. When he held her she could feel all of him. All that he’d eaten in his thick stomach. Pressing against her like a pot of jelly, springing back with every jab and prod. “Don’t you want me to hold you?” he’d mumble, spread out on the linen. “No. Not if you hold me like that,” she’d bite back, rolling to her side. He was a Wednesday child, that was the problem. She’d heard it when she was little. Born on a Wednesday. Full of woe. Pain and misfortune trailing behind like a mangy dog. He carried it with him like a badge of honour. On his brow, in his shoulders, at the tip ends of his downturned lips. Burden so heavy, it curved his spine. Gave him bow legs. She was a Friday child. Opposite to all the melancholy that consumed him. Where he sighed, she laughed. Where he took, she gave. That’s what she understood. “Why do you believe in these tales?” he’d moan. “Well, why don’t you?” she’d snap. His brother fit her though. For an hour, maybe less, on a sticky Thursday afternoon in room 17 at Planation Inn off US-90. Bodies sweating into the sheets, skin caked in the Louisiana sun. He didn’t have a round stomach, or heavy hands. He was lean, fit. His