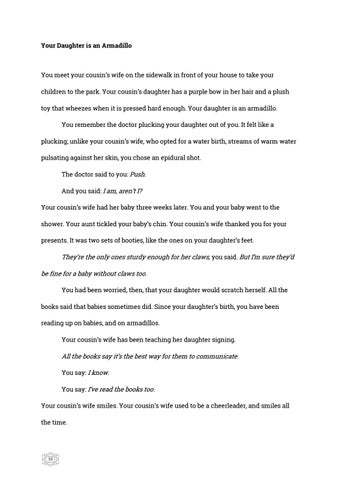 Your Daughter is an Armadillo

You meet your cousin’s wife on the sidewalk in front of your house to take your children to the park. Your cousin’s daughter has a purple bow in her hair and a plush toy that wheezes when it is pressed hard enough. Your daughter is an armadillo. You remember the doctor plucking your daughter out of you. It felt like a plucking; unlike your cousin’s wife, who opted for a water birth, streams of warm water pulsating against her skin, you chose an epidural shot. The doctor said to you: Push. And you said: I am, aren’t I? Your cousin’s wife had her baby three weeks later. You and your baby went to the shower. Your aunt tickled your baby’s chin. Your cousin’s wife thanked you for your presents. It was two sets of booties, like the ones on your daughter’s feet.

They’re the only ones sturdy enough for her claws, you said. But I’m sure they’d be fine for a baby without claws too. You had been worried, then, that your daughter would scratch herself. All the books said that babies sometimes did. Since your daughter’s birth, you have been reading up on babies, and on armadillos. Your cousin’s wife has been teaching her daughter signing.