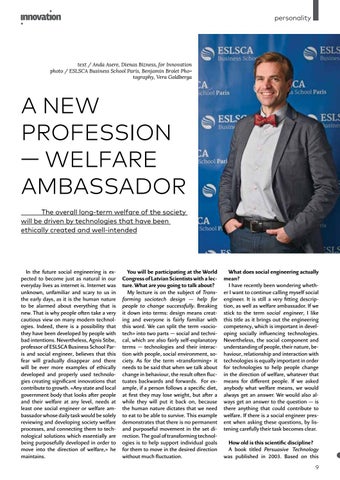 In the future social engineering is expected to become just as natural in our everyday lives as internet is. Internet was unknown, unfamiliar and scary to us in the early days, as it is the human nature to be alarmed about everything that is new. That is why people often take a very cautious view on many modern technologies. Indeed, there is a possibility that they have been developed by people with bad intentions. Nevertheless, Agnis Stibe, professor of ESLSCA Business School Paris and social engineer, believes that this fear will gradually disappear and there will be ever more examples of ethically developed and properly used technologies creating significant innovations that contribute to growth. «Any state and local government body that looks after people and their welfare at any level, needs at least one social engineer or welfare ambassador whose daily task would be solely reviewing and developing society welfare processes, and connecting them to technological solutions which essentially are being purposefully developed in order to move into the direction of welfare,» he maintains.

You will be participating at the World Congress of Latvian Scientists with a lecture. What are you going to talk about? My lecture is on the subject of Transforming sociotech design — help for people to change successfully. Breaking it down into terms: design means creating and everyone is fairly familiar with this word. We can split the term «sociotech» into two parts — social and technical, which are also fairly self-explanatory terms — technologies and their interaction with people, social environment, society. As for the term «transforming» it needs to be said that when we talk about change in behaviour, the result often fluctuates backwards and forwards. For example, if a person follows a specific diet, at first they may lose weight, but after a while they will put it back on, because the human nature dictates that we need to eat to be able to survive. This example demonstrates that there is no permanent and purposeful movement in the set direction. The goal of transforming technologies is to help support individual goals for them to move in the desired direction without much fluctuation.

What does social engineering actually mean? I have recently been wondering whether I want to continue calling myself social engineer. It is still a very fitting description, as well as welfare ambassador. If we stick to the term social engineer, I like this title as it brings out the engineering competency, which is important in developing socially influencing technologies. Nevertheless, the social component and understanding of people, their nature, behaviour, relationship and interaction with technologies is equally important in order for technologies to help people change in the direction of welfare, whatever that means for different people. If we asked anybody what welfare means, we would always get an answer. We would also always get an answer to the question — is there anything that could contribute to welfare. If there is a social engineer present when asking these questions, by listening carefully their task becomes clear. How old is this scientific discipline? A book titled Persuasive Technology was published in 2003. Based on this 9 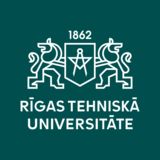