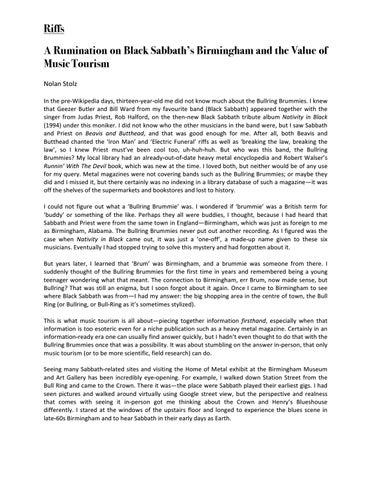 In the pre-Wikipedia days, thirteen-year-old me did not know much about the Bullring Brummies. I knew that Geezer Butler and Bill Ward from my favourite band (Black Sabbath) appeared together with the singer from Judas Priest, Rob Halford, on the then-new Black Sabbath tribute album Nativity in Black (1994) under this moniker. I did not know who the other musicians in the band were, but I saw Sabbath and Priest on Beavis and Butthead, and that was good enough for me. After all, both Beavis and Butthead chanted the ‘Iron Man’ and ‘Electric Funeral’ riffs as well as ‘breaking the law, breaking the law’, so I knew Priest must’ve been cool too, uh-huh-huh. But who was this band, the Bullring Brummies? My local library had an already-out-of-date heavy metal encyclopedia and Robert Walser’s Runnin’ With The Devil book, which was new at the time. I loved both, but neither would be of any use for my query. Metal magazines were not covering bands such as the Bullring Brummies; or maybe they did and I missed it, but there certainly was no indexing in a library database of such a magazine—it was off the shelves of the supermarkets and bookstores and lost to history. I could not figure out what a ‘Bullring Brummie’ was. I wondered if ‘brummie’ was a British term for ‘buddy’ or something of the like. Perhaps they all were buddies, I thought, because I had heard that Sabbath and Priest were from the same town in England—Birmingham, which was just as foreign to me as Birmingham, Alabama. The Bullring Brummies never put out another recording. As I figured was the case when Nativity in Black came out, it was just a ‘one-off’, a made-up name given to these six musicians. Eventually I had stopped trying to solve this mystery and had forgotten about it. But years later, I learned that ‘Brum’ was Birmingham, and a brummie was someone from there. I suddenly thought of the Bullring Brummies for the first time in years and remembered being a young teenager wondering what that meant. The connection to Birmingham, err Brum, now made sense, but Bullring? That was still an enigma, but I soon forgot about it again. Once I came to Birmingham to see where Black Sabbath was from—I had my answer: the big shopping area in the centre of town, the Bull Ring (or Bullring, or Bull-Ring as it’s sometimes stylized). This is what music tourism is all about—piecing together information firsthand, especially when that information is too esoteric even for a niche publication such as a heavy metal magazine. Certainly in an information-ready era one can usually find answer quickly, but I hadn’t even thought to do that with the Bullring Brummies once that was a possibility. It was about stumbling on the answer in-person, that only music tourism (or to be more scientific, field research) can do. Seeing many Sabbath-related sites and visiting the Home of Metal exhibit at the Birmingham Museum and Art Gallery has been incredibly eye-opening. For example, I walked down Station Street from the Bull Ring and came to the Crown. There it was—the place were Sabbath played their earliest gigs. I had seen pictures and walked around virtually using Google street view, but the perspective and realness that comes with seeing it in-person got me thinking about the Crown and Henry’s Blueshouse differently. I stared at the windows of the upstairs floor and longed to experience the blues scene in late-60s Birmingham and to hear Sabbath in their early days as Earth.

This special edition of Riffs was produced for Music Heritage, People and Place, a public symposium organised in response to the Home of Metal (HoM) 2019 season of exhibitions and events in Birmingham, UK. Home of Metal is a heritage project created and led by the Capsule organisation. The symposium was funded by the Birmingham Centre for Media and Cultural Research at Birmingham City University, in partnership with Home of Metal.