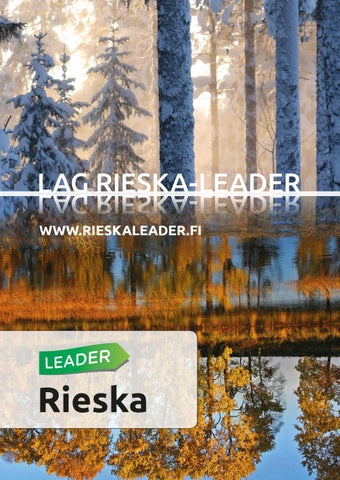 The action of the LAG Rieska-Leader has following four themes in the period 2014 to 2020: 1. Entrepreneurship The LAG supports start-up and small businesses, especially those employing 1-2 people.

Rieska-Leader is a rural development association, one of the 54 Local Action Groups in Finland. It is a non-profit organization established in 1996. The LAG has the task of encouraging rural inhabitants to develop their local area. It also supports preservation of local services, as well as promoting of livelihoods and employment under the principle of sustainable development. The association cooperates with local people, enterprises, communities, organizations and authorities. About 50 new projects are financed annually by the LAG Rieska-Leader. The association distributes grants to non-profit development projects and enterprise projects. Its tasks also include information and advising of rural inhabitants, enterprises and communities on EU funding as well as on planning and implementation of projects.

The LAG supports developing of local communities and encourages village actives and communities to network.

3. New models of local services The LAG encourages to introduction of new approaches, products and solutions for local services. Those services could be made by communities or / and micro-enterprises.

4. Attractivity of the area The LAG encourages inhabitants to improve their livelihoods, possibilities for recreation and hobbies.

The horizontal themes are Ecological sustainable development, Innovations, Youth and Multiculturalism. The LAG Rieska-Leader is interested in international cooperation concerning all themes above. The LAG has participated in several transnational cooperation projects since the end of the 1990â&amp;#x20AC;&amp;#x2122;s and is eager to take part in new projects.

The area of the LAG Rieska-Leader consists of following seven communities: Alavieska, Kalajoki, Kannus, MerijĂ¤rvi, Oulainen, Sievi and Ylivieska. About 50,000 people live in this area of 4,400 km2. The area is situated in the middle of Finland, on the west coast by the Gulf of Bothnia. The biggest town (15 000) in the area is Ylivieska, which is an attractive center of trade. The second biggest town, Kalajoki, is known as a popular tourist resort. Kalajoki is situated by the Gulf of Bothnia and you can find there some of the northernmost beaches of the world. The economic structure of the area is as follows: services 56 %, industry 31 %, primary production 12 % and others 1 %. Earlier this area was agriculture-intensive, but nowadays trade and services are clearly dominant. The nature in the area of the LAG RieskaLeader is diverse with its wild forests, beautiful rivers and lakes. Also the sea is nearby. The topography consists of low-lying plain. The diverse and clean nature offers a wonderful opportunity to many activities close to nature, such as fishing, hunting, picking berries and mushrooms. These are important ways of spending time and relaxing for the local people.

• Finland is situated in Northern Europe, in Scandinavia. • Its neighboring countries are Sweden in the west, Norway in the north and Russia in the east. • The capital of Finland is Helsinki, which lies on the south coast by the Gulf of Finland. • The next biggest cities are Espoo, Tampere, Vantaa, Turku, Oulu and Jyväskylä. • The population of Finland is about 5.4 million. • Finland covers an area of 338,430 km2, 10 % of which consists of inland waters. • Finland is a very sparsely populated country, for the population density is only 17.7 people / km2. • There are two official languages in Finland. Finnish is the mother tongue for 90.4 % and Swedish for 5.4 % of the population. • The economic structure is services 67 %, industry • 30 % and primary production 3 %. • Finland gained independence on December 6th 1917. • Finland is a republic and part of the European Union. • The currency of Finland is euro since 2002.