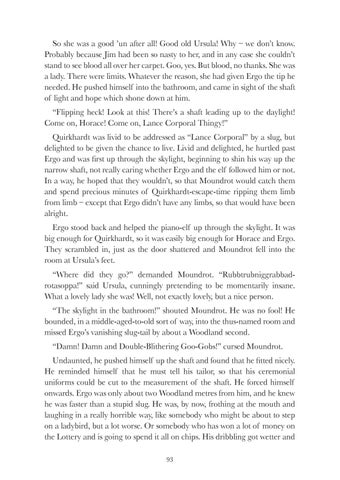 So she was a good ’un after all! Good old Ursula! Why – we don’t know. Probably because Jim had been so nasty to her, and in any case she couldn’t stand to see blood all over her carpet. Goo, yes. But blood, no thanks. She was a lady. There were limits. Whatever the reason, she had given Ergo the tip he needed. He pushed himself into the bathroom, and came in sight of the shaft of light and hope which shone down at him. “Flipping heck! Look at this! There’s a shaft leading up to the daylight! Come on, Horace! Come on, Lance Corporal Thingy!” Quirkhardt was livid to be addressed as “Lance Corporal” by a slug, but delighted to be given the chance to live. Livid and delighted, he hurtled past Ergo and was first up through the skylight, beginning to shin his way up the narrow shaft, not really caring whether Ergo and the elf followed him or not. In a way, he hoped that they wouldn’t, so that Moundrot would catch them and spend precious minutes of Quirkhardt-escape-time ripping them limb from limb – except that Ergo didn’t have any limbs, so that would have been alright. Ergo stood back and helped the piano-elf up through the skylight. It was big enough for Quirkhardt, so it was easily big enough for Horace and Ergo. They scrambled in, just as the door shattered and Moundrot fell into the room at Ursula’s feet. “Where did they go?” demanded Moundrot. “Rubbtrubniggrabbadrotasoppa!” said Ursula, cunningly pretending to be momentarily insane. What a lovely lady she was! Well, not exactly lovely, but a nice person. “The skylight in the bathroom!” shouted Moundrot. He was no fool! He bounded, in a middle-aged-to-old sort of way, into the thus-named room and missed Ergo’s vanishing slug-tail by about a Woodland second. “Damn! Damn and Double-Blithering Goo-Gobs!” cursed Moundrot. Undaunted, he pushed himself up the shaft and found that he fitted nicely. He reminded himself that he must tell his tailor, so that his ceremonial uniforms could be cut to the measurement of the shaft. He forced himself onwards. Ergo was only about two Woodland metres from him, and he knew he was faster than a stupid slug. He was, by now, frothing at the mouth and laughing in a really horrible way, like somebody who might be about to step on a ladybird, but a lot worse. Or somebody who has won a lot of money on the Lottery and is going to spend it all on chips. His dribbling got wetter and 93