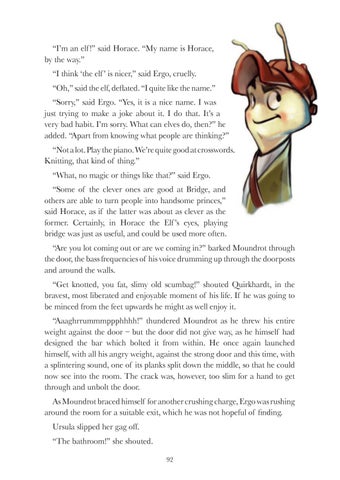 “I’m an elf !” said Horace. “My name is Horace, by the way.” “I think ‘the elf ’ is nicer,” said Ergo, cruelly. “Oh,” said the elf, deflated. “I quite like the name.” “Sorry,” said Ergo. “Yes, it is a nice name. I was just trying to make a joke about it. I do that. It’s a very bad habit. I’m sorry. What can elves do, then?” he added. “Apart from knowing what people are thinking?” “Not a lot. Play the piano. We’re quite good at crosswords. Knitting, that kind of thing.” “What, no magic or things like that?” said Ergo. “Some of the clever ones are good at Bridge, and others are able to turn people into handsome princes,” said Horace, as if the latter was about as clever as the former. Certainly, in Horace the Elf ’s eyes, playing bridge was just as useful, and could be used more often. “Are you lot coming out or are we coming in?” barked Moundrot through the door, the bass frequencies of his voice drumming up through the doorposts and around the walls. “Get knotted, you fat, slimy old scumbag!” shouted Quirkhardt, in the bravest, most liberated and enjoyable moment of his life. If he was going to be minced from the feet upwards he might as well enjoy it. “Aaaghrrummmppphhhh!” thundered Moundrot as he threw his entire weight against the door – but the door did not give way, as he himself had designed the bar which bolted it from within. He once again launched himself, with all his angry weight, against the strong door and this time, with a splintering sound, one of its planks split down the middle, so that he could now see into the room. The crack was, however, too slim for a hand to get through and unbolt the door. As Moundrot braced himself for another crushing charge, Ergo was rushing around the room for a suitable exit, which he was not hopeful of finding. Ursula slipped her gag off. “The bathroom!” she shouted. 92