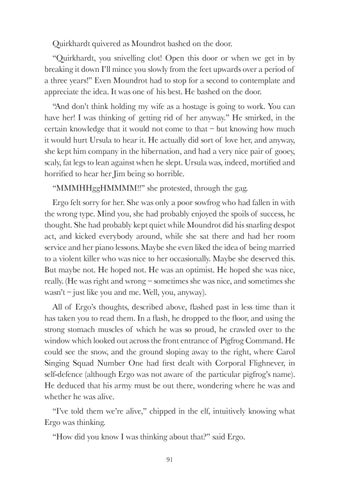 Quirkhardt quivered as Moundrot bashed on the door. “Quirkhardt, you snivelling clot! Open this door or when we get in by breaking it down I’ll mince you slowly from the feet upwards over a period of a three years!” Even Moundrot had to stop for a second to contemplate and appreciate the idea. It was one of his best. He bashed on the door. “And don’t think holding my wife as a hostage is going to work. You can have her! I was thinking of getting rid of her anyway.” He smirked, in the certain knowledge that it would not come to that – but knowing how much it would hurt Ursula to hear it. He actually did sort of love her, and anyway, she kept him company in the hibernation, and had a very nice pair of gooey, scaly, fat legs to lean against when he slept. Ursula was, indeed, mortified and horrified to hear her Jim being so horrible. “MMMHHggHMMMM!!” she protested, through the gag. Ergo felt sorry for her. She was only a poor sowfrog who had fallen in with the wrong type. Mind you, she had probably enjoyed the spoils of success, he thought. She had probably kept quiet while Moundrot did his snarling despot act, and kicked everybody around, while she sat there and had her room service and her piano lessons. Maybe she even liked the idea of being married to a violent killer who was nice to her occasionally. Maybe she deserved this. But maybe not. He hoped not. He was an optimist. He hoped she was nice, really. (He was right and wrong – sometimes she was nice, and sometimes she wasn’t – just like you and me. Well, you, anyway). All of Ergo’s thoughts, described above, flashed past in less time than it has taken you to read them. In a flash, he dropped to the floor, and using the strong stomach muscles of which he was so proud, he crawled over to the window which looked out across the front entrance of Pigfrog Command. He could see the snow, and the ground sloping away to the right, where Carol Singing Squad Number One had first dealt with Corporal Flighnever, in self-defence (although Ergo was not aware of the particular pigfrog’s name). He deduced that his army must be out there, wondering where he was and whether he was alive. “I’ve told them we’re alive,” chipped in the elf, intuitively knowing what Ergo was thinking. “How did you know I was thinking about that?” said Ergo. 91