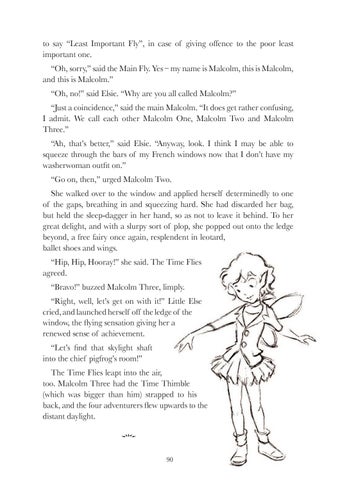 to say “Least Important Fly”, in case of giving offence to the poor least important one. “Oh, sorry,” said the Main Fly. Yes – my name is Malcolm, this is Malcolm, and this is Malcolm.” “Oh, no!” said Elsie. “Why are you all called Malcolm?” “Just a coincidence,” said the main Malcolm. “It does get rather confusing, I admit. We call each other Malcolm One, Malcolm Two and Malcolm Three.” “Ah, that’s better,” said Elsie. “Anyway, look. I think I may be able to squeeze through the bars of my French windows now that I don’t have my washerwoman outfit on.” “Go on, then,” urged Malcolm Two. She walked over to the window and applied herself determinedly to one of the gaps, breathing in and squeezing hard. She had discarded her bag, but held the sleep-dagger in her hand, so as not to leave it behind. To her great delight, and with a slurpy sort of plop, she popped out onto the ledge beyond, a free fairy once again, resplendent in leotard, ballet shoes and wings. “Hip, Hip, Hooray!” she said. The Time Flies agreed. “Bravo!” buzzed Malcolm Three, limply. “Right, well, let’s get on with it!” Little Else cried, and launched herself off the ledge of the window, the flying sensation giving her a renewed sense of achievement. “Let’s find that skylight shaft into the chief pigfrog’s room!” The Time Flies leapt into the air, too. Malcolm Three had the Time Thimble (which was bigger than him) strapped to his back, and the four adventurers flew upwards to the distant daylight. 5 90