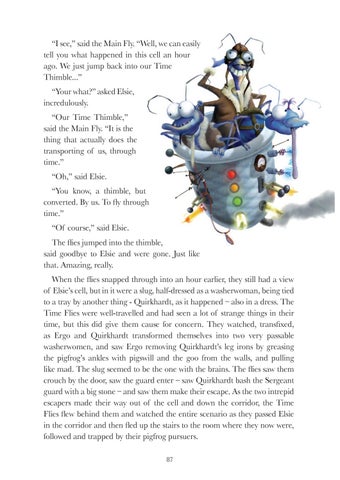 “I see,” said the Main Fly. “Well, we can easily tell you what happened in this cell an hour ago. We just jump back into our Time Thimble...” “Your what?” asked Elsie, incredulously. “Our Time Thimble,” said the Main Fly. “It is the thing that actually does the transporting of us, through time.” “Oh,” said Elsie. “You know, a thimble, but converted. By us. To fly through time.” “Of course,” said Elsie. The flies jumped into the thimble, said goodbye to Elsie and were gone. Just like that. Amazing, really. When the flies snapped through into an hour earlier, they still had a view of Elsie’s cell, but in it were a slug, half-dressed as a washerwoman, being tied to a tray by another thing - Quirkhardt, as it happened – also in a dress. The Time Flies were well-travelled and had seen a lot of strange things in their time, but this did give them cause for concern. They watched, transfixed, as Ergo and Quirkhardt transformed themselves into two very passable washerwomen, and saw Ergo removing Quirkhardt’s leg irons by greasing the pigfrog’s ankles with pigswill and the goo from the walls, and pulling like mad. The slug seemed to be the one with the brains. The flies saw them crouch by the door, saw the guard enter – saw Quirkhardt bash the Sergeant guard with a big stone – and saw them make their escape. As the two intrepid escapers made their way out of the cell and down the corridor, the Time Flies flew behind them and watched the entire scenario as they passed Elsie in the corridor and then fled up the stairs to the room where they now were, followed and trapped by their pigfrog pursuers. 87