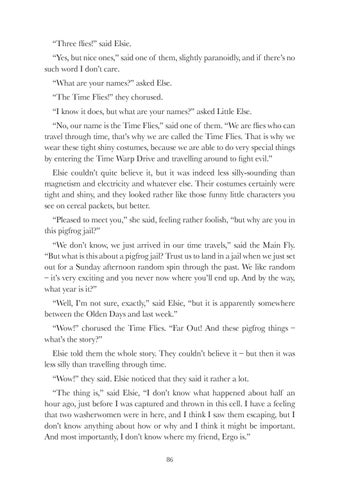 “Three flies!” said Elsie. “Yes, but nice ones,” said one of them, slightly paranoidly, and if there’s no such word I don’t care. “What are your names?” asked Else. “The Time Flies!” they chorused. “I know it does, but what are your names?” asked Little Else. “No, our name is the Time Flies,” said one of them. “We are flies who can travel through time, that’s why we are called the Time Flies. That is why we wear these tight shiny costumes, because we are able to do very special things by entering the Time Warp Drive and travelling around to fight evil.” Elsie couldn’t quite believe it, but it was indeed less silly-sounding than magnetism and electricity and whatever else. Their costumes certainly were tight and shiny, and they looked rather like those funny little characters you see on cereal packets, but better. “Pleased to meet you,” she said, feeling rather foolish, “but why are you in this pigfrog jail?” “We don’t know, we just arrived in our time travels,” said the Main Fly. “But what is this about a pigfrog jail? Trust us to land in a jail when we just set out for a Sunday afternoon random spin through the past. We like random – it’s very exciting and you never now where you’ll end up. And by the way, what year is it?” “Well, I’m not sure, exactly,” said Elsie, “but it is apparently somewhere between the Olden Days and last week.” “Wow!” chorused the Time Flies. “Far Out! And these pigfrog things – what’s the story?” Elsie told them the whole story. They couldn’t believe it – but then it was less silly than travelling through time. “Wow!” they said. Elsie noticed that they said it rather a lot. “The thing is,” said Elsie, “I don’t know what happened about half an hour ago, just before I was captured and thrown in this cell. I have a feeling that two washerwomen were in here, and I think I saw them escaping, but I don’t know anything about how or why and I think it might be important. And most importantly, I don’t know where my friend, Ergo is.” 86