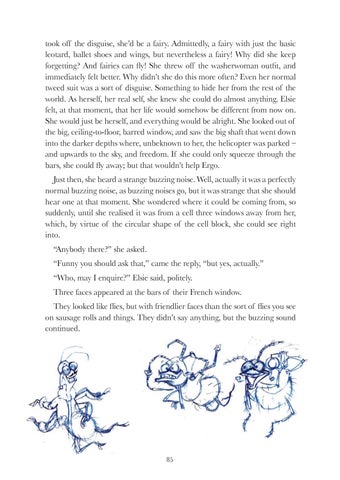 took off the disguise, she’d be a fairy. Admittedly, a fairy with just the basic leotard, ballet shoes and wings, but nevertheless a fairy! Why did she keep forgetting? And fairies can fly! She threw off the washerwoman outfit, and immediately felt better. Why didn’t she do this more often? Even her normal tweed suit was a sort of disguise. Something to hide her from the rest of the world. As herself, her real self, she knew she could do almost anything. Elsie felt, at that moment, that her life would somehow be different from now on. She would just be herself, and everything would be alright. She looked out of the big, ceiling-to-floor, barred window, and saw the big shaft that went down into the darker depths where, unbeknown to her, the helicopter was parked – and upwards to the sky, and freedom. If she could only squeeze through the bars, she could fly away; but that wouldn’t help Ergo. Just then, she heard a strange buzzing noise. Well, actually it was a perfectly normal buzzing noise, as buzzing noises go, but it was strange that she should hear one at that moment. She wondered where it could be coming from, so suddenly, until she realised it was from a cell three windows away from her, which, by virtue of the circular shape of the cell block, she could see right into. “Anybody there?” she asked. “Funny you should ask that,” came the reply, “but yes, actually.” “Who, may I enquire?” Elsie said, politely. Three faces appeared at the bars of their French window. They looked like flies, but with friendlier faces than the sort of flies you see on sausage rolls and things. They didn’t say anything, but the buzzing sound continued.