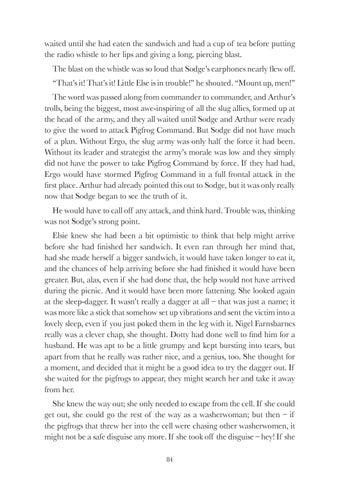 waited until she had eaten the sandwich and had a cup of tea before putting the radio whistle to her lips and giving a long, piercing blast. The blast on the whistle was so loud that Sodge’s earphones nearly flew off. “That’s it! That’s it! Little Else is in trouble!” he shouted. “Mount up, men!” The word was passed along from commander to commander, and Arthur’s trolls, being the biggest, most awe-inspiring of all the slug allies, formed up at the head of the army, and they all waited until Sodge and Arthur were ready to give the word to attack Pigfrog Command. But Sodge did not have much of a plan. Without Ergo, the slug army was only half the force it had been. Without its leader and strategist the army’s morale was low and they simply did not have the power to take Pigfrog Command by force. If they had had, Ergo would have stormed Pigfrog Command in a full frontal attack in the first place. Arthur had already pointed this out to Sodge, but it was only really now that Sodge began to see the truth of it. He would have to call off any attack, and think hard. Trouble was, thinking was not Sodge’s strong point. Elsie knew she had been a bit optimistic to think that help might arrive before she had finished her sandwich. It even ran through her mind that, had she made herself a bigger sandwich, it would have taken longer to eat it, and the chances of help arriving before she had finished it would have been greater. But, alas, even if she had done that, the help would not have arrived during the picnic. And it would have been more fattening. She looked again at the sleep-dagger. It wasn’t really a dagger at all – that was just a name; it was more like a stick that somehow set up vibrations and sent the victim into a lovely sleep, even if you just poked them in the leg with it. Nigel Farnsbarnes really was a clever chap, she thought. Dotty had done well to find him for a husband. He was apt to be a little grumpy and kept bursting into tears, but apart from that he really was rather nice, and a genius, too. She thought for a moment, and decided that it might be a good idea to try the dagger out. If she waited for the pigfrogs to appear, they might search her and take it away from her. She knew the way out; she only needed to escape from the cell. If she could get out, she could go the rest of the way as a washerwoman; but then – if the pigfrogs that threw her into the cell were chasing other washerwomen, it might not be a safe disguise any more. If she took off the disguise – hey! If she 84