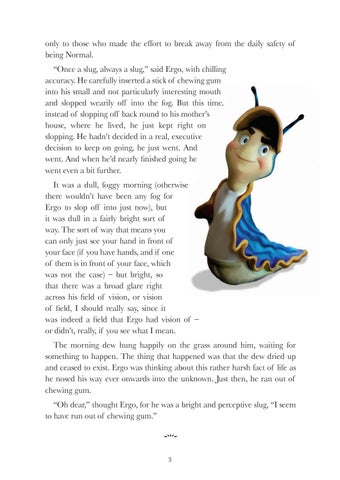 only to those who made the effort to break away from the daily safety of being Normal. “Once a slug, always a slug,” said Ergo, with chilling accuracy. He carefully inserted a stick of chewing gum into his small and not particularly interesting mouth and slopped wearily off into the fog. But this time, instead of slopping off back round to his mother’s house, where he lived, he just kept right on slopping. He hadn’t decided in a real, executive decision to keep on going, he just went. And went. And when he’d nearly finished going he went even a bit further. It was a dull, foggy morning (otherwise there wouldn’t have been any fog for Ergo to slop off into just now), but it was dull in a fairly bright sort of way. The sort of way that means you can only just see your hand in front of your face (if you have hands, and if one of them is in front of your face, which was not the case) – but bright, so that there was a broad glare right across his field of vision, or vision of field, I should really say, since it was indeed a field that Ergo had vision of – or didn’t, really, if you see what I mean. The morning dew hung happily on the grass around him, waiting for something to happen. The thing that happened was that the dew dried up and ceased to exist. Ergo was thinking about this rather harsh fact of life as he nosed his way ever onwards into the unknown. Just then, he ran out of chewing gum. “Oh dear,” thought Ergo, for he was a bright and perceptive slug, “I seem to have run out of chewing gum.” 5 3