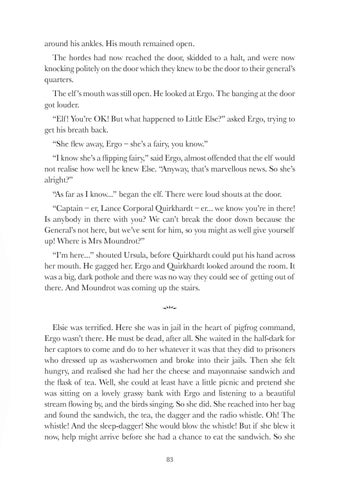 around his ankles. His mouth remained open. The hordes had now reached the door, skidded to a halt, and were now knocking politely on the door which they knew to be the door to their general’s quarters. The elf ’s mouth was still open. He looked at Ergo. The banging at the door got louder. “Elf ! You’re OK! But what happened to Little Else?” asked Ergo, trying to get his breath back. “She flew away, Ergo – she’s a fairy, you know.” “I know she’s a flipping fairy,” said Ergo, almost offended that the elf would not realise how well he knew Else. “Anyway, that’s marvellous news. So she’s alright?” “As far as I know...” began the elf. There were loud shouts at the door. “Captain – er, Lance Corporal Quirkhardt – er... we know you’re in there! Is anybody in there with you? We can’t break the door down because the General’s not here, but we’ve sent for him, so you might as well give yourself up! Where is Mrs Moundrot?” “I’m here...” shouted Ursula, before Quirkhardt could put his hand across her mouth. He gagged her. Ergo and Quirkhardt looked around the room. It was a big, dark pothole and there was no way they could see of getting out of there. And Moundrot was coming up the stairs. 5 Elsie was terrified. Here she was in jail in the heart of pigfrog command, Ergo wasn’t there. He must be dead, after all. She waited in the half-dark for her captors to come and do to her whatever it was that they did to prisoners who dressed up as washerwomen and broke into their jails. Then she felt hungry, and realised she had her the cheese and mayonnaise sandwich and the flask of tea. Well, she could at least have a little picnic and pretend she was sitting on a lovely grassy bank with Ergo and listening to a beautiful stream flowing by, and the birds singing. So she did. She reached into her bag and found the sandwich, the tea, the dagger and the radio whistle. Oh! The whistle! And the sleep-dagger! She would blow the whistle! But if she blew it now, help might arrive before she had a chance to eat the sandwich. So she 83