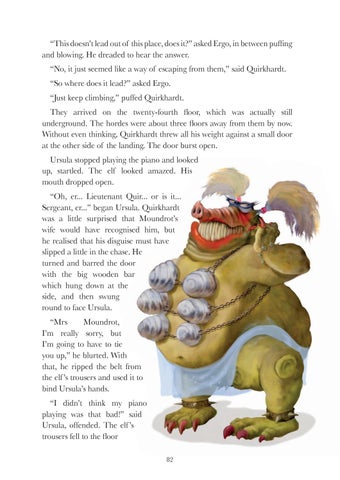 “This doesn’t lead out of this place, does it?” asked Ergo, in between puffing and blowing. He dreaded to hear the answer. “No, it just seemed like a way of escaping from them,” said Quirkhardt. “So where does it lead?” asked Ergo. “Just keep climbing,” puffed Quirkhardt. They arrived on the twenty-fourth floor, which was actually still underground. The hordes were about three floors away from them by now. Without even thinking, Quirkhardt threw all his weight against a small door at the other side of the landing. The door burst open. Ursula stopped playing the piano and looked up, startled. The elf looked amazed. His mouth dropped open. “Oh, er... Lieutenant Quir... or is it... Sergeant, er...” began Ursula. Quirkhardt was a little surprised that Moundrot’s wife would have recognised him, but he realised that his disguise must have slipped a little in the chase. He turned and barred the door with the big wooden bar which hung down at the side, and then swung round to face Ursula. “Mrs Moundrot, I’m really sorry, but I’m going to have to tie you up,” he blurted. With that, he ripped the belt from the elf ’s trousers and used it to bind Ursula’s hands. “I didn’t think my piano playing was that bad!” said Ursula, offended. The elf ’s trousers fell to the floor 82