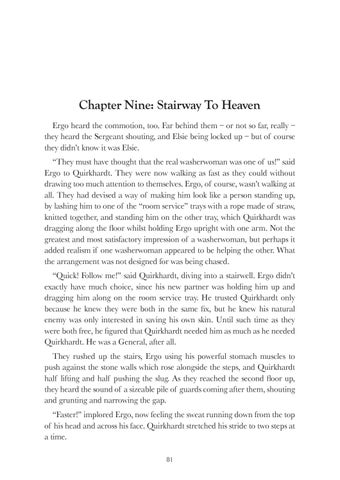 Chapter Nine: Stairway To Heaven Ergo heard the commotion, too. Far behind them – or not so far, really – they heard the Sergeant shouting, and Elsie being locked up – but of course they didn’t know it was Elsie. “They must have thought that the real washerwoman was one of us!” said Ergo to Quirkhardt. They were now walking as fast as they could without drawing too much attention to themselves. Ergo, of course, wasn’t walking at all. They had devised a way of making him look like a person standing up, by lashing him to one of the “room service” trays with a rope made of straw, knitted together, and standing him on the other tray, which Quirkhardt was dragging along the floor whilst holding Ergo upright with one arm. Not the greatest and most satisfactory impression of a washerwoman, but perhaps it added realism if one washerwoman appeared to be helping the other. What the arrangement was not designed for was being chased. “Quick! Follow me!” said Quirkhardt, diving into a stairwell. Ergo didn’t exactly have much choice, since his new partner was holding him up and dragging him along on the room service tray. He trusted Quirkhardt only because he knew they were both in the same fix, but he knew his natural enemy was only interested in saving his own skin. Until such time as they were both free, he figured that Quirkhardt needed him as much as he needed Quirkhardt. He was a General, after all. They rushed up the stairs, Ergo using his powerful stomach muscles to push against the stone walls which rose alongside the steps, and Quirkhardt half lifting and half pushing the slug. As they reached the second floor up, they heard the sound of a sizeable pile of guards coming after them, shouting and grunting and narrowing the gap. “Faster!” implored Ergo, now feeling the sweat running down from the top of his head and across his face. Quirkhardt stretched his stride to two steps at a time. 81