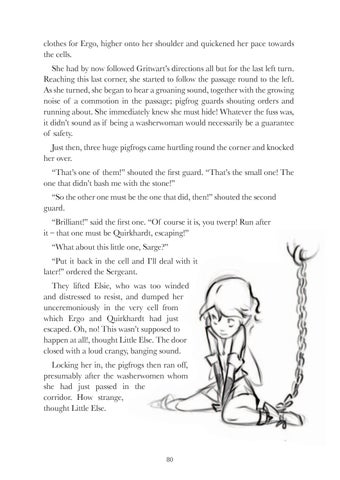 clothes for Ergo, higher onto her shoulder and quickened her pace towards the cells. She had by now followed Gritwart’s directions all but for the last left turn. Reaching this last corner, she started to follow the passage round to the left. As she turned, she began to hear a groaning sound, together with the growing noise of a commotion in the passage; pigfrog guards shouting orders and running about. She immediately knew she must hide! Whatever the fuss was, it didn’t sound as if being a washerwoman would necessarily be a guarantee of safety. Just then, three huge pigfrogs came hurtling round the corner and knocked her over. “That’s one of them!” shouted the first guard. “That’s the small one! The one that didn’t bash me with the stone!” “So the other one must be the one that did, then!” shouted the second guard. “Brilliant!” said the first one. “Of course it is, you twerp! Run after it – that one must be Quirkhardt, escaping!” “What about this little one, Sarge?” “Put it back in the cell and I’ll deal with it later!” ordered the Sergeant. They lifted Elsie, who was too winded and distressed to resist, and dumped her unceremoniously in the very cell from which Ergo and Quirkhardt had just escaped. Oh, no! This wasn’t supposed to happen at all!, thought Little Else. The door closed with a loud crangy, banging sound. Locking her in, the pigfrogs then ran off, presumably after the washerwomen whom she had just passed in the corridor. How strange, thought Little Else.